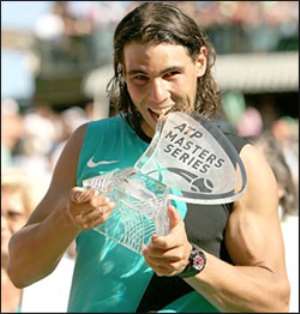 The world number one was pushed hard as Djokovic dominated the second set and had break points early in the third, before Nadal battled back to win.

Only Andre Agassi has won more, with 17 Masters titles.

Nadal becomes the first man to win five Monte Carlo titles in a row, but he faced one of his toughest examinations on a clay court in recent years.

With only four wins in 15 previous matches against Nadal - and none in six clay-court encounters - Djokovic was under relatively little pressure for such a big final.

And after recovering from dropping serve in the opening game, the 21-year-old Serb levelled immediately and began to mix his game up well, sealing a second break with a drop shot.

Nadal was making more errors than usual but a couple of trademark forehands helped him break to love in game five and from there he reeled off another four straight games to take the set.

The beginning of the deciding set was a tense, closely-fought and dramatic affair, with the first three games all going to deuce and producing a hatful of break points for both men.

There was another contender for rally of the season in game one, as Nadal withstood huge pressure to save a break point by chasing down a drop sot and producing an incredible angled winner.

Three break points went begging for Djokovic, and in the following, equally epic game, the Serb let three game points slip away with errors and double-faults.

Nadal finally earned his chance with a fantastic wrong-footing backhand pass down the line, and Djokovic obliged with  a missed forehand on break point.

The chances kept coming and Djokovic converted his third break point in the following game before the Serb finally cracked in game four, being broken to love to trail 3-1.

Nadal looked much the stronger now, quickly holding to love, and a tired-looking Djokovic double-faulted on break point in game six as the set ran away from him. After two hours and 43 minutes, Djokovic netted a forehand on match point and Nadal fell backwards onto the red dirt in celebration of his 27th straight match win in Monte Carlo.