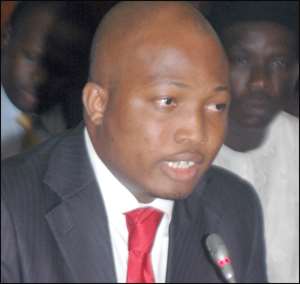 Okudzeto Ablakwa SAMUEL OKUDZETO Ablakwa, a Deputy Minister-designate for Information was virtually on his knees last Friday begging Members of Parliament (MPs) to forgive him for making unsavory remarks about them.

Ablakwa, an ardent member of the Committee for Joint Action (CJA), had in a sleazy manner on  Radio Gold's 'Alhaji and Alhaji' Programme and other media networks described MPs as “inward looking, vulgar and inconsiderate”, over the controversial ex-gratia for the law makers.

Appearing before the Appointments Committee of Parliament for vetting and with his immediate political fate in the hands of the MPs, Ablakwa ate the humble pie in a dramatic fashion by withdrawing the malicious words and profusely apologizing to the members of the august House.

After being subjected to diligent questioning and intensive scrutiny by MP for Manhyia, Dr. Matthew Opoku Prempeh, the Deputy Information Minister-designate pitiably succumbed, “I apologize to all MPs. It is not my style to denigrate MPs and Parliament where I was proud to have done my National Service”.

The spectacular u-turn by the usually strident Ablakwa earned him some sympathy from members of the Appointments Committee including the Minority Leader and MP for Suame, Osei Kyei-Mensah-Bonsu, and MP for Abuakwa South and legal celebrity Samuel Atta Akyea.

“The demeanour of the nominee has significantly disabled me,” Hon. Kyei-Mensah-Bonsu stated after taking his turn to quiz Ablakwa, noting that “as human as we are, we all make mistakes and it takes someone with courage to admit his mistakes and publicly apologize”.

The 28-year-old nominee was thoroughly grilled on many issues including his short political career, his conduct as NUGS President, what he would do at the Ministry of Information and the withholding of his certificate by University of Ghana, Legon, some resulting in open discomfort of one of his referees and possible mentor, Kwesi Pratt Jnr who sat through the vetting process to give him moral support.

Ablakwa and other members of the CJA have been ruthlessly uncharitable to MPs and former President John Agyekum Kufuor for the approval of the recommendations by the Chinery-Hesse report on ex-gratia for all office holders under Article 71 of the 1992 Constitution, which include members of the Executive, the Legislature and the Judiciary.

The group, in street demonstrations and on media networks, has unfortunately described the package of the ex-gratia as unreasonable considering the prevailing global economic meltdown, dire financial needs of the country and the plight of Ghanaians.

However, former President Kufuor who has publicly admitted approving the ex-gratia for MPs compared what Ghanaian MPs are earning to those of their counterparts in neighbouring countries with less financial resources and concluded that the country's law makers actually deserve better than they are receiving now.

He saw the agitation of the CJA as uninformed populists brouhaha as people only look at the value of the package without objectively considering the invaluable work of legislators in deepening Ghana's democratic culture.

Notwithstanding their vaunted humanitarian crusade, lambasting of MPs and 'the economy is broke' mantra, some members of the CJA including Ablakwa received colossal amounts of Ghanaian cedis as 'ex-gratia', after participating in the work of the National Democratic Congress (NDC) Transition Team.

Indeed, the Commander-in-Chief of the CJA, Kwesi Pratt nearly jumped out of his seat in protest when the MP for Bekwai, Joseph Osei-Owusu remarked that Ablakwa should have forfeited his post-Transition Team End of Service Benefit (ESB) to give meaning to their 'mobrowa' struggle.

Earlier, another member of the CJA, Dr. Edward Kofi Omane Boamah appeared before the Appointments Committee as President John Atta Mills' nominee for Deputy Minister for Environment, Science and Technology.

Like Ablakwa, he was quizzed on the saga of the ex-gratia, his political career, what he can offer at his new portfolio if given the nod and his characterization of successive governments when he was NUGS President.

Dr. Boamah's vetting was equally dramatic as he was compelled by his own shortcomings to withdraw some unsubstantiated comments made against the erstwhile New Patriotic Party (NPP) administration.

The appearance of the two nominees before the Appointments Committee of Parliament marked the end of the first stanza of 75 ministerial nominees by President Mills pending any more nominations.

Hon. Doe Adjaho and Kyei-Mensah-Bonsu, Chairman of the Committee and Minority Leader respectively took turns to congratulate all stakeholders for their immense contributions to the vetting process.

The Minority Leader noted that the vetting has contributed to deepening the practice and the democratic credentials of the country.

He told the nominees not to take issues personal as there was no deliberate attempt by members of the Appointments Committee to obstruct them from becoming ministers of state.

Closing the session, Hon. Doe Adjaho thanked the Speaker of Parliament, the Clerk and his staff, security agencies, Parliamentary Press Corps and the whole media for their input.

He said although there might have been some challenges and indeed criticisms from the general public, members of the Committee were clear in their mind what they set out to do and have by and large performed creditably.