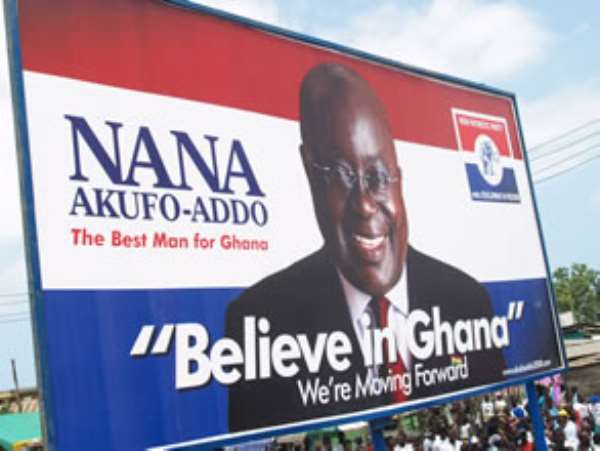 
Even before the four-year term of office of the current National Executive of the New Patriotic Party (NPP) expires in December this year, the battle lines appear to have been drawn, as top shots of the party are lacing their boots for a possible showdown in the race to elect new national officers to steer the affairs of the party back to power.

A number of interesting names, including Boakye Agyarko, Kennedy Agyapong, Kofi Osei-Ameyaw, Kwabena Agyepong, and Gloria Afua Akuffo are being whispered as possible candidates for the various positions.
Daily Guide gathered that some of the big guns are already lobbying for the positions while others are still consulting on whether or not to contest.

Reports indicate that the party would be having a National Delegates' Conference in May this year to review portions of its constitution and possibly amend them in order to increase the number of executive positions.

Deep-throat sources say the party may be considering adding the positions of a deputy or two to the existing positions that have no deputies.

Among the names making the rounds as possible candidates for the party's National Chairman slot include Stephen Ntim, former first vice-chairman who contested and lost the chairmanship to Peter Mac Manu during the congress in December 2005; Jake Obetsebi-Lamptey, the party's Campaign Chairman and former Greater Accra Regional Chairman; Boakye Agyarko, who contested the party's flag-bearer position in 2007; and the incumbent, Peter Mac Manu, who sources say would be considering a second term in office.

Nana Akomea, MP for Okaikoi South and Ken Wuud Nuworsu, Volta Regional Chairman have their names being floated as possible contenders for the first and second deputy chairman positions.
For the General Secretary position, the name of Kwabena Agyepong, a fire-brand party loyalist who contested the 2007 presidential primary, has come up very prominently.

Other names making the rounds for the same position include that of Stephen Asamoah-Boateng, former Minister for Information and National Orientation and defeated MP for Mfantsiman; and Lawyer Abeiku Dickson, who lost the position to Nana Ohene Ntow in 2005. DAILY GUIDE has picked clear signals that Kofi Osei-Ameyaw, defeated MP for Asuogyman is also eyeing the position.

The incumbent General Secretary, Nana Ohene Ntow, is still interested in the position and has started an underground 'four-more-for-Ohene-Ntow' campaign.

It is not clear if Lord Oblitey Commey would be seeking a renewal of mandate as National Organiser but grapevine reports suggest that Alhaji Moctar Bamba, formerly of the Office of the President, and Ms Gloria Akuffo, former Minister for Aviation are readying themselves for positions.

Daily Guide gathered that if Nana Akufo-Addo does not show early signs of going in for the party's flagbearer position, his spokesperson, Mustapha Hamid may jostle for the National Organiser position as well.

A confidential list sighted by Daily Guide has the name of Kennedy Ohene Agyapong, the millionaire MP for Assin North and owner of Ken City Media as one of the persons being spoken to, to go in for the National Treasurer position.

There are also talks in the party that the current crop of national officers should be voted out for not being able to retain the party in power owing to factionalism and internal bickering.

Another school of thought is that there is the need to go in for an Executive that has a blend of the old faces as well as some new but more youthful and vibrant faces.