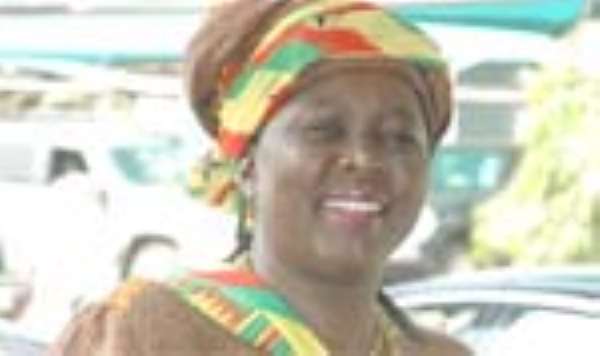 As the clock ticks and the 7th December titanic general elections approach, DAILY GUIDE can say that the underground and over-ground scheming to be picked as running-mate to Nana Addo Dankwa Akufo-Addo is getting hotter by the hour.

If hints dropped by Lord Commey, National Organiser of the ruling New Patriotic Party (NPP) is anything to go by, then the panic is understandable, considering the fact that the party's running mate could be named in a matter of three weeks.

Latest information picked up by DAILY GUIDE indicates that the race to catch Nana's attention has taken a new twist, with a report that it is now a straight fight between Hajia Alima Mahama, Minister of Women and Children's Affairs and Alhaji Malik Alhassan Yakubu, Second Deputy Speaker of Parliament.

Alhaji Yakubu, who lost his Interior ministerial portfolio after a bitter chieftaincy dispute in Yendi, is being touted as a compromise candidate.

Mr Commey told the media that all things being equal, the running mate would be named at a National Executive Conference tentatively slated for the second week of next month.

Political pundits have boldly speculated, after in-depth permutations, that all the on-going maneuvering for the running mate slot in the ruling party would end latest by the eve of Saturday August 9, 2008 when the party holds its annual conference.

The keenness attached to the running mate race is getting so alarming that DAILY GUIDE learnt the issue of a compromise candidate is being floated to reduce the pressure on Nana Akufo-Addo.

At the mammoth rally at Kasoa last Sunday where the party outdoored Nana Addo and the parliamentary candidates, MP for Akim Oda and former Finance Minister, Yaw Osafo-Maafo, a confidante of the flagbearer, reportedly hinted that five people, all of them Muslims of northern extract, have been short-listed to be screened for the final selection.

At the rally, which political pundits have described as the largest single congregation of humans in the country since the Independence Eve gathering on 5th March, 1957 at the Polo Grounds, the presence of four of those reportedly short-listed were heavily felt.

While hundreds of Boniface supporters clad in his T-shirts thronged the venue in what looked like chartered buses, chanting his name in a slogan 'No Bonnie, No Veep', Hajia Mahama's supporters had large banners erected at strategic locations at the rally grounds, with her photographs boldly on them.

And if numbers are anything to go by, then one can say that Boniface, the MP for Salaga, who is the most heavily represented there, has the brightest chance.

The Women's Affairs Minister also had a large following of placard-bearing youth rooting for her.

Some of her placards read 'Hajia for Veep', 'Hajia for Mother Ghana' and 'Naa Alima, Naa Nana'.

She mounted the stage two weekends ago alongside Nana at the La Pleasure Beach for a beach jam.

Alhaji Jawula was not left out in the floating of aspirants as his supporters were also there in their numbers.

Rashid Bawa was also sighted seated right behind Nana Akufo-Addo on the podium erected for the NPP hot shots at the Kasoa rally.

Interestingly Sheik I.C. Quaye was not left out of events as his supporters wore T-shirts with photographs of him and Nana on the front, and his now popular slogan, 'Agbeenaa' boldly written at the back.

However, unconfirmed information filtering in yesterday from sources close to Nana Addo suggests that there is a strong possibility of a neutral face being named to partner the NPP candidate.

The source said Alhaji Malik Alhassan Yakubu, MP for Yendi is seriously being considered in the event of Hajia Alima not getting the nod.

A Muslim and lawyer by profession, Hon. Yakubu is currently a member of the Pan-African Parliament from Ghana as well as its vice president.

Born in Tamale in the late 1940s, he attended the Dagomba District Council Primary School, Yendi, between 1954 and 1959, Government Secondary School, Tamale, University of Ghana, Legon and later Ghana School of Law.

He was previously Minister of the Interior, but resigned in 2002 in the heat of the Yendi conflict.

As at press time yesterday, another name popping up in the rumour mill was that of Takoradi MP, Mrs. Gladys Asmah.

The septuagenarian, born October 16, 1936, is currently the Minister for Fisheries, and the oldest woman in the present Ghanaian Parliament.

The rumour that Mrs. Asmah, a southerner and Christian, is being considered, however goes to conflict a statement attributed to Mr. Mustapha Hameed, Spokesperson of Nana Addo, who said the running mate is going to be a northern Muslim, which was emphasized by Hon Osafo-Maafo on Sunday.

For now the whole Veep issue looks like a jig-saw puzzle whose curtain will be drawn in a matter of days, albeit dramatically.

The Innocent Flower Looking Akufo-Addo Is The Mother Serpent...
52 seconds ago