Stop making me a scapegoat or... - Lord Commey 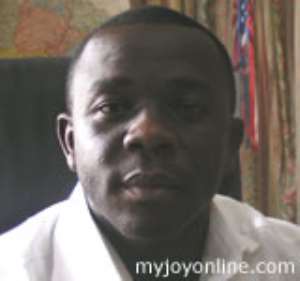 
The National Organizer of the ruling New Patriotic Party (NPP) , Mr. Lord Commey, known for his outspokenness, has issued a stern warning to the spokespersons of the resigned party member and the immediate past Minister of Trade, Industry and Presidential Special Initiative, Mr. Alan John Kwadwo Kyerematen, to stop using his name in the ongoing resignation saga.

According to him, it would be in the best interest of such spokespersons and other social commentators to leave him alone or else he would be forced to take some actions, which would not be in the larger interest of the party.

"It is important that I set the records straight that I have never mentioned Paul Afoko's name and I still stand by what I said at the congress. I want to tell those commentators or the spokespersons of Mr. Alan Kyerematen to leave me alone," he charged.

Fuming with rage over the allegations that his pronouncement at the December 22 congress was one of the factors that caused the exit of Mr. Kyerematen from the NPP, Mr. Commey insisted in a telephone chat with this paper that he did not respond to Mr. Paul Afoko's letter, one of the loyalists of the resigned party member, demanding an apology and retraction because of the supreme interest of the party.

He dismissed the allegations of victimisation and harassment, which the key spokespersons of Alan Cash claimed were some of the factors that culminated in the resignation of their boss from the NPP.

"They should leave me alone because I am not part of any victimization, if there is any. I don't even think there is any, so they should stop maligning me. They should count me out," he said. He noted that it was unfortunate and unthinkable for Alan who has not officially complained or wrote to indicate that "my pronouncement at the congress was part of the reasons why I have resigned but his people are trying to create such an impression."

Responding to why Alan Cash might have left the NPP, he said, "I have no comment for now. I am only speaking because of the utterances and the comments of the spokespersons. I bear nobody any grudge and I hope that by this all the discerning people within the rank and file of this great party would revise their notes."

To him, apart from the fact that he did not respond to the lawyers of Mr. Afoko, who accused him (Commey) of defamation and many others, he treated the whole episode with contempt on the basis that he did not mention his name.

According to him, Mr. Paul Afoko after the accusations, later shifted the goal post by stating that he himself did not hear the mentioning of his name, and that it was Mr. Kwabena Agyei-Agyapong who told him.

The NPP's field marshal dared Mr. Afoko and the spokespersons to produce the tape recordings which he (Commey) mentioned his name as the one sharing money to induce the delegates.

"The whole programme was carried live and all the media were present.

Let the media houses play my voice or they should provide it for the media to play. I am saying that I still stand by what I said at the December congress and if they have no case, they should leave me alone. I want to believe that they are exposed because they cannot mention or provide the tape recordings."

Mr. Lord Commey told this paper that as far as he was concerned, what happened at the December 22 congress had been put behind and the party was focusing on how to win the upcoming elections.

"We have an onerous task ahead of us. We need to work collectively as a team to win the next elections. Let us not try to sow seeds of discomfort or discord among ourselves." he advised.

Just few days after Mr. Alan Kyerematen resigned from the NPP citing intimidations, harassment of his supporters and how he was relegated by the campaign team of Akufo-Addo, his spokespersons, especially Mr. John Kuma sought to zero in on the issue of Mr. Commey.

Mr. Commey, however, rebuffed the assertions and cautioned them.