I HAD ZONGO GIRLFRIEND 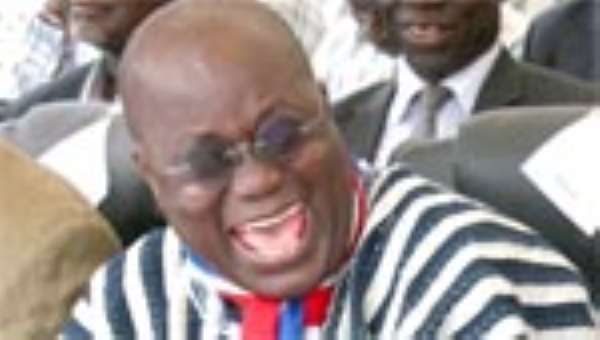 THE presidential candidate of the ruling New Patriotic Party (NPP), Nana Addo Dankwa Akufo-Addo took his claims of being a Zongo boy to another level when he disclosed that he nearly married a Zongo woman in his youthful days.

“I am the true Zongo boy among the presidential aspirants. I was born and raised in Zongo communities, therefore I have traits of Zongo in me.

“I even nearly married a Zongo woman and this is an ample proof that I know the challenges of Zongo communities better than my competitors and can solve them earnestly and better when I become President.”

Nana Akufo-Addo, who was born at Cowlane and bred at Nima, both Zongo suburbs of the national capital, Accra, made the disclosure at a durbar of Zongo Chiefs and people of Ejura in the Ejura Sekyeredumase Constituency of the Ashanti region last Monday.

This revelation by Nana Akufo-Addo received deafening applause from the jubilant crowd, who stood under the scorching sun for almost three hours just to hear the former Foreign Affairs Minister speak.

It would be recalled that for sometime now both the NPP and the opposition National Democratic Congress (NDC) have been at each other's throat over which of them was a true Zongo party and therefore had concerns of the deprived Zongo communities at heart.

Nana Akufo-Addo insisted that he had in his lifetime been a Zongo boy and would forever remain so, and entreated the Zongo communities scattered across the country to unanimously give him their mandate to expedite the fast development of their areas.

He implored them not to make the mistake of voting the NDC back to power, noting that they would do the country a great disservice if they gave their mandate to the NDC in the upcoming polls.

“Ghana has come a long way before reaching this current path to glory, so bringing the NDC back to power will draw us back from prosperity,” he stated, adding that the opposition party could not cater for the Zongo communities during its 20 years in power and would not do it this time too.

Nana Akufo-Addo described the NDC as people whose stock in trade was peddling lies just to attain political power and admonished the electorate, especially those in the Zongo communities to treat lies being peddled by the opposition party with all the contempt they deserved.

“They lied to you that NPP was an anti-Zongo party which would expel Zongo people from the country when they attain political power. Have you been sacked by anybody?” Nana Addo asked, to which the charged crowd shouted, “No! No!! No!!!”.

The NPP presidential aspirant emphatically stated that no citizen of the country, irrespective of the region or where they hailed from, should be described as a foreigner. “How can you be referred to as an alien in your own country?”, Nana Addo asked angrily.

Nana Akufo-Addo promised to raise the dignity of the Zongo communities “and this I will do by embarking on the fast and proper development of your areas when I become the First Gentleman of the country come January next year.”

In his remarks, Alhaji Arimiyao, the Gonja Chief of Ejura expressed the hope that with Nana Addo as President, Ghana's problems would be a thing of the past, and prayed for Allah's guidance for the NPP Presidential candidate as he tours the country to campaign.

He urged Nana Addo to keep faith with the Zongo communities when he becomes President.