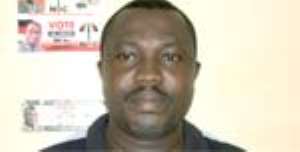 The Tema West Constituency of the National Democratic Congress (NDC) on Saturday elected a 55-year-old contractor, George Medie as its parliamentary candidate for the 2008 presidential and parliamentary elections.

He won overwhelming votes of 102 out of the 180 votes cast to beat Mr Roger Bekoe Dawson and Collins Owusu Appiah, both farmers, who polled 56 and 22 votes respectively.

Just before the start of the elections, which was conducted by Electoral Commission officials in Tema, Samuel Ofosu-Ampofo, national organizer of the party withdrew from the contest, while another contestant, Mr Justice Yaw Tetteh also stepped down.

Mr Ofosu-Ampofo was the MP for Fanteakwa in the Eastern Region before he lost out in the 2004 election to the New Patriotic Party (NPP).

He subsequently shifted camp to Tema, hoping to stand for the party, before he decided to pull out at the last minute.

Yaw Boateng Gyan, deputy national organizer of the NDC reminded party faithful that as elections are won at polling station levels, they should register as polling agents to be able to exercise extra vigilance at the polling centres to avoid rigging.

They should also embark on house-to-house campaigns to win more members into their folds and vote massively for the party to wrest the seat from the ruling New Patriotic Party, he entreated them.

Captain Anthony Cudjoe (rtd), constituency chairman commended the members for their sacrifice and hard work which had sustained the party at the constituency level, and urged them to maintain the spirit and support to ensure its progress.

In his acceptance speech, Mr Medie, appealed to all members to support him by intensifying their inter-personal campaigns to win more sympathizers to vote for the party, as opinion poll suggests that the constituents need an alternative parliamentary candidate to champion their welfare.