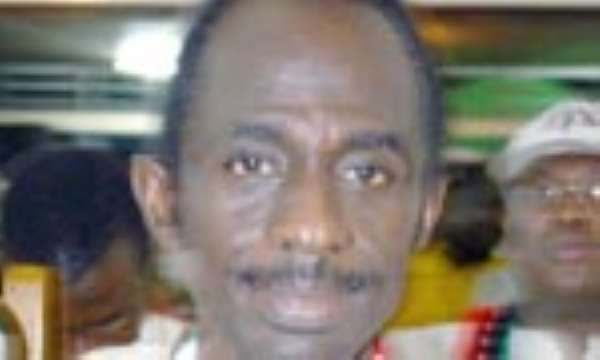 Referring to the recent brouhaha across the country over the health of the former Vice President, he lamented that the agitation to get him replaced on health grounds was generated from within the party itself.

The Omanhene, who was speaking in his palace at Techiman when Prof Atta Mills and some key members of his party paid a courtesy call on him to officially announce their presence in his area, told the NDC's flagbearer that no one, other than his own party members, was responsible for spreading rumours of his ailment and the subsequent death-scare, adding that if one senses an insect bite, one should trace it to his own cloth.

Oseadeeyo Akumfi Ameyaw IV was however elated that the death scare that was spread countrywide was not true.

According to him, every human institution is bound to have people expressing dissenting views, but stressed that it isn't every single problem that needs to be discussed in public.

He maintained that it was traditionally a wise decision for the torch-bearer to embark on such a journey to show himself to all and sundry to prove that he was still alive.

He said if members had learned to keep their mouths shut, most of the issues that trickled into the media would have been avoided.

Contributing, the Ankobeahene of the area, Nana Kwame Owusu, asked politicians to educate their supporters to desist from violent acts.

He expressed dismay that while the top brass of political parties interact with their colleagues in other parties, the rank and file do not see eyeball to eyeball, saying politics is not an avenue to settle old scores.

For his part, Nana Asa Akompanin, Kyidomhene of Techiman Traditional Area, noted that it is not chiefs who direct their subjects to vote in a particular war, stressing that terrific campaign and good campaign message are enough to sway the people.

Professor Mills, who mostly spoke through the general secretary of the NDC, Asiedu Nketia a.k.a General Mosquito, asked that he be prayed for to capture the seat of power so he could turn the economy around.

General Mosquito noted that it was about time the oppressed were freed from their poverty and squalor, adding that Atta Mills was their God-sent deliverer.

He told the Zongo communities both in Sunyani and Techiman that the NPP administration had not done enough for them since they assumed office, and therefore should be voted out.

He mentioned the Muslim Education Unit and the Muslim holy days celebrations as some of the benefits they had when the NDC was in power.

He promised that all regional Imams whom he said were equal to Christian Bishops would be given diplomatic passports to end their struggle for acquiring traveling documents.

He stated that never in the history of Ghana have there been so many problems associated with the annual Islamic Pilgrimage to Mecca as was the case in the era of the NPP, because the party cared less about the affairs of Muslims.

On his part, the NDC MP for Asutifi South, Collins Dauda, cautioned the people to be wary of the National Identification Programme on the suspicion that the government has a hidden agenda to disenfranchise persons especially of Northern extraction because of their affiliations with the NDC.

He called on the aged as well as illiterates to make sure they went with a relative or friend who could explain the process to them at the various registration centres.