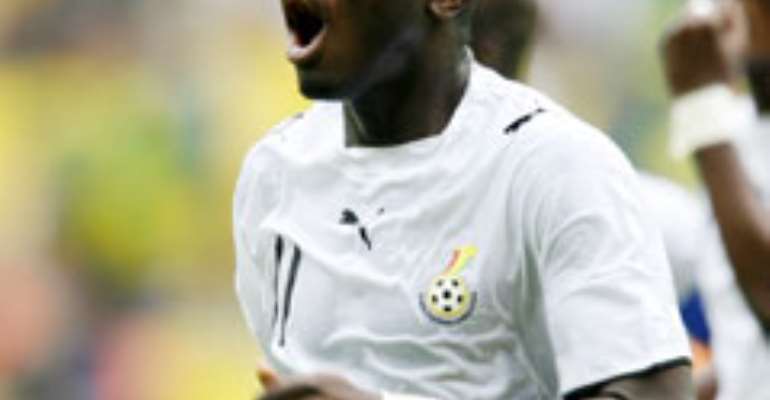 The Portsmouth midfielder perfectly controlled Micheal Essien's pass from 25-yards and unleashed a powerful drive to the blind side of goalkeeper Camara Kemoko.

Asamoah Gyan became the tournament's first goal getter after converting a spot-kick in the 54th minute for Ghana's first goal.

Goalkeeper Richard Kingston initiated the attack with a kick and striker Gyan headed backwards to Agogo who applied his legs for the tackle.

The Guinea's restored hope in their group campaign and with the equalizer 11 minutes later.

Kalabane made amends for his tackle that awarded Ghana the penalty by heading straight into the net.

A corner-kick was effected from the left flank and the Black Stars defense were caught ball watching to stun the partisan home crowd.

The first half ended goalless with the host nation slightly on top. The Black Stars hit the wood-work thrice.

Agogo's header in the 19th minute struck the goal-post with Kemoko completely beaten after Qunicy Owusu-Abeyie had made a surging run into the box.

Laryea Kingson's cross into the 18-yard box found Essien's header but that was denied by the post.

Muntari's volley should have drafted the obituary of the Sylli National but that well struck kick failed to shake the net but the goal post.

The Black Stars now top Group A since Namibia and Morocco play on Monday at the Ohene Djan Sports Stadium.

Ghana's next game is on 24 January against Namibia.