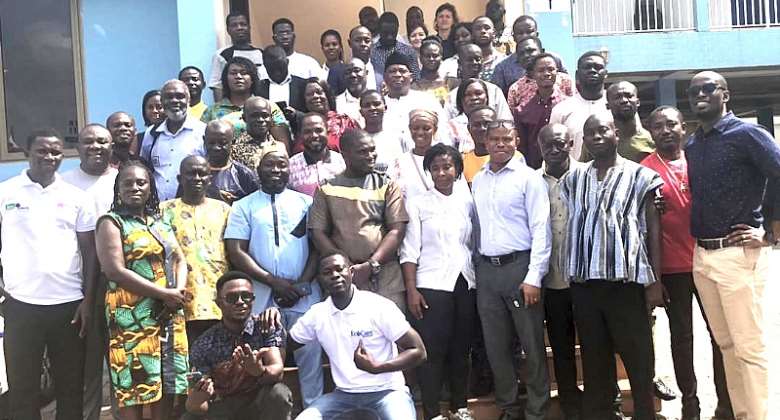 A group photograph during the event

The group joined hands with EcoCare Ghana, a rights-based campaign and advocacy organisation based in Ghana, in launching the accountability map.

The need for the map, according to Mighty Earth, was to help curb the reoccurring forest loss in West African countries.

Launched at the Erata Hotel in Accra on Tuesday, December 6, the group noted that Ghana alone, from 2002 to 2021 (a space of 19 years), lost a whopping humid primary forest land of 112 hectares due to expansion of cocoa farms.

The "unofficial" report, referred to by Mighty Earth in a presentation, further revealed that a total loss of humid primary forest of 26% and 9.3% were recorded in Ghana and Cote d’Ivoire, the two leading producers of world cocoa, respectively, between 2002 and 2012.

As government, interested bodies, as well as law enforcement agencies have failed to put an end to the deforestation of forest reserves, mostly by cocoa farmers, the two natural resource advocacy groups, say their interactive map will be used to track cocoa-driven deforestation in Ghana.

Speaking about the essence of the interactive accountability map, Dr Julian Oram, Senior Director for Africa at Mighty Earth, opined that though the campaign to end deforestation in forest reserves is achievable, it will be smoother if farmers are given the right and deserving amount for their produce and also "creating a disincentive to farm in forest reserves or protected areas."

"Secondly, we need effective monitoring, which is where our Ghana Cocoa Accountability Map comes in. Our aim is for farmers, cocoa companies, NGOs, and government organisations to work together to end deforestation in supply chains and meet commitments for full traceability from farm gate to chocolate product," Dr. Omran added.

According to Mr. Sam Mawutor, Senior Advisor for Ghana at Mighty Earth, the cocoa beans' journey from farm to the first point of purchase remains untraceable at the moment, leaving room for beans from deforested areas to be mixed with those grown on legally cultivated land.

“The grim reality is that 30–40% of cocoa is still untraceable. Some chocolate companies are sitting on that information," he stressed.

The map, he said, can be used to raise deforestation alerts and hold big businesses accountable for bad practices, adding that "locally we’re promoting the use of agroforestry approaches, which give value to standing trees and help diversify farmer livelihoods."

To make the map more useful, Mighty Earth is currently training local cocoa farmer cooperatives and Ghana CSO Cocoa Platform members to use the map collaboratively to gain further insight into traceability at the local level, beyond the LBC locations published by corporations.

Some farmers also believe that the initiative will help create awareness about the menace of forest degradation, some of which is the poor growth of cocoa trees, leading to high production costs for the "poor" farmers to bear.

Some also refuse to accept the entirety of the blame for forest degradation in cocoa farming areas, calling out the activities of illegal mining as a key contributor.

In a nutshell, the farmers showed their readiness to collaborate and do their best to ensure that their crops are mostly grown on legally cultivated lands.

Chairman of the Cocoa Abrabopa Association and a member of the Ghana Civil Society Cocoa Platform (GCCP), Ismaila Pomasi, speaking to Modernghana News on the sidelines of the program, debunked the notion that increasing cocoa prices will boost the farmers’ zeal to engage in forest degradation to expand their farms.

He indicated it will rather suffice the farmer and prevent the thought of indulging in degradation, which is mostly for the sake of getting more for their inputs, and even attract the youth to farming to boost agricultural contribution to the country's economic growth.

The European Union (EU) has agreed on a new law to prevent companies from selling into the EU market coffee, beef, cocoa, soy, and other commodities linked to deforestation around the world as a way of ensuring a green environment.

On the sidelines, Mr. Mawutor spoke about how this new legislation would affect farmers, indicating that, though it may be hard, it is the right thing to do, so farmers should cooperate and be devoid of any driving force pushing them to degrade the forest for farm expansion.

From 2019 onwards, Mighty Earth has been using RADD (Radar for Detecting Deforestation) forest alert data to identify areas of recent land clearance across Ghana, which has lost over 2.5 million hectares (33.7%) of its forest since the early 1990s.

The program was attended by farmers, members of the Ghana Civil Society Cocoa Platform (GCCP), staff of EcoCare Ghana and Mighty Earth groups as well as reps from some selected media houses.

Kindly access the map via the link below;
https://mightyearth2022.users.earthengine.app/view/ghana-cocoa-accountability-map