13 January 1972- The Beginning of The Acheampong Years 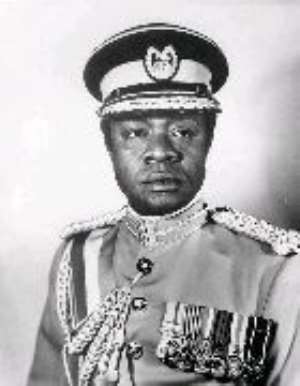 Today marks the 34th anniversary of the end of Ghana's Second Republic, when the Progress Party government of Dr. Busia was dispatched into political oblivion. Our new leaders, the fourth lot since independence, grandly called themselves our redeemers and formed the National Redemption Council. The people poured into the streets, cheering and hailing these men and heaping abuse on Busia and his followers.

Led by the rather flamboyant, handkerchief-waving Col. Acheampong, the coup makers made it clear that one of the principal reasons why they had clambered on the political stage was that 'even the few amenities we enjoyed under Nkrumah were taken away from us by Busia'. One of their first acts was to reverse the Busia government's 44% devaluation of the cedi. The people cheered, and Acheampong's popularity soared. He then decided that 'Yentua' ('we will not pay'- i.e in reference to our national debts to our creditors contracted in bad faith). The people cheered even louder. After all, he reasoned, 'Kafo Didi' (the debtor too must 'chop'). The people went wild with joy. Overnight, Acheampong became a man of the people. As a tenant, you could perhaps repeat the Head of State's mantra to your landlord if he came to disturb you for his rent after 'moon die'. After all, it was national policy, so to speak.

In 1974, the NRC government embarked on an ambitious programme to make Ghana self-sufficient in agricultural production. 'Operation Feed Yourself' was launched, followed by 'Operation Feed Your Industries'. The Dawhenya Irrigation Project was commissioned. This was perhaps Acheampong's most significant programme that achieved a certain measure of success in terms of agricultural sustainability for the nation.

The NRC, which had originally consisted of six military officers and one civilian, was eventually opened up to include the heads of the various services- army, air force, navy, border guards and the police. In 1975, the National Redemption Council metamorphosed to become the SMC-Supreme Military Council.

Like others before it, Acheampong's rule gave rise to its own buzzwords- 'the commanding heights of the economy; 'the chit system', 'Union Government', and the National Charter of Redemption with its seven famous principles (remember 'One Nation, One People, One Destiny'?), to name a few. But perhaps the one enduring word that his rule gave us and which etched itself in the Ghanaian psyche and parlance for a long time is 'Kalabule'.

This word came into common usage somewhere between 1974-76, at the time when the 'chit' system was the only means by which certain ladies got access to 'essential commodities' and sold them to the public at cut-throat prices. Milk, sugar, 'tinapa' and Omo, to name a few, were scarce on the open market. You could only get them through these powerful ladies who strode along the corridors of power as if it was their personal fiefdoms, cavorting with government officials, fluttering their eyelashes and wriggling their ample behinds at them. 'Kalabule' encapsulates all that went wrong with Acheampong's government as the rot set in during the latter years of his rule-rampant corruption, obscene and glaring abuse of office and the sickening plunder of state resources.

Acheampong himself was famous for his outbursts and his tendency to speak his mind whatever the consequences. He became, in the minds of many, the loveable, if simple yet cheeky rogue. He once revealed in public that he had been told Ghanaians were complaining that since his rule began, the rains had not been forthcoming. Furious, he burst out, 'Am I God, to cause rain to fall'? He is also reported to have told striking university students he did not care one jot if they did not want to go back to their studies, since he had not had much education himself, and yet had ascended to the highest office in the land. Diplomacy and niceties were obviously not his strongest points. His alleged generousity with Golf cars to certain ladies (conditional, of course ) was also legendary, as was his alleged reasoning that there was nothing wrong with having a backyard garden even if one had a farm, as a way of apparently explaining away his philandering. His love of sport saw him take over as Sports Commissioner at a time he was Head of State, Chairman of the SMC and Finance Commissioner. Kumasi Sports Stadium was commissioned in his time. His wife, Faustie, was also a colourful personality in her own right.

Like most leaders who have been in the seat of power too long for their own good, Acheampong eventually started fancying himself as The Great One. He decided that he had done enough to deserve promotion from a mere colonel. In a spectacular military long jump that that would put the great Carl Lewis to shame, he leapt straight from Colonel and landed at the rank of full General. The man from Trabuom and one-time Vice-Principal of Swedru College of Commerce had come a long way indeed.

Now, it came to pass that Acheampong decided in his great wisdom that multi-party politics was not good for our political health, and that it led to tribalism and division. So after some brainstorming in the national laboratory called Osu Castle, 'Dr.' Acheampong, on 12th October 1976, prescribed a spanking new political system. He called his medication Union Government (a.k.a 'nkabom aban'). His prescription determined that the army, the police and civilians would all join together in harmony and rule Ghana till the end of time.

The creaking state apparatus was set in motion to propagate the gospel according to Kutu. The state radio, television and print media were filled with endless acclamations singing the praises of Acheampong and his Unigov concept whilst debunking 'party aban' as the cancer of society.

But not everybody was happy with this Acheampong medicine, and soon enough, certain sections of the populace started to splutter and cough rather loudly-notably the People's Movement for Freedom and Justice (PMFJ), led by the likes of General Afrifa, Prof. Adu-Boahen, Komla Gbedemah and Nana Akuffo Addo, who was its Secretary-General. The PMFJ also campaigned relentlessly against Acheampong's brainchild. It was decided to put the matter to a referendum for the good people of Ghana to decide.

30th March 1978 was Referendum Day. The Electoral Commissioner, Mr. Justice Abban, made a heroic attempt to rebuff government intimidation and interference with the results of the referendum. He ended up escaping over a wall with his two top officials when Acheampong's soldiers stormed the Electoral Commission's premises that night. The Commissioner of Information, Col. Parker-Yarney, declared that Unigov had won the referendum with 55% of the total 1,983,678 votes cast. The people snorted in disgust, as allegations of rigging spread like harmattan bush fires.

As dissent and dissatisfaction in the country grew and political temperatures rose, the nation awoke on 5th July 1978 to the announcement that there had been a little bloodless game of musical chairs at the castle. Acheampong had not been quick enough to grab a seat. The Kutu road show had come to a crashing end. SMC II came into being, the fifth government since independence twenty-one years earlier. Little less than a year later, both old and new heads of state, along with other military chiefs, had their mortal existence snuffed out, bound to the stakes at the Teshie firing range and executed in the wake of yet another military coup. Views expressed by the author(s) do not necessarily reflect those of GhanaHomePage.