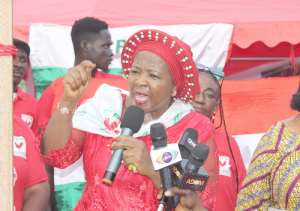 Nana Akosua Frimpomaa Sarpong Kumankumah, the Chairperson of the Convention People’s Party (CPP), has called on the Progressive people’s Party (PPP) to merge with the CPP to win the 2024 general election.

She said the eight years of “electoral football” between the National Democratic Congress and the New Patriotic Party had impoverished the populace, hence the need for a merger to ensure a return to Ghana's development trajectory through the time-tested ideals of the CPP and PPP.

Nana Sarpong Kumankumah made the appeal in a solidarity message at the PPP’s 10th Anniversary at Elmina in the Central Region on Saturday.

It was on the theme: “10 Years of Progressive Focus to Bring Change in Ghana's Democratic Governance – The Way Forward.”

She restated the critical need for the CPP and PPP to lay to rest their systemic ideological differences and unite to save the country from the economic doldrums.

The CPP Chairperson regretted the internal deep-seated squabbles that led to the unfortunate exit of Dr Papa Kwesi Nduom from the party to form the PPP.

She touted Dr Nduom’s immeasurable contributions to the rank and file of the CPP and said if he were to been with CPP for the 2020 polls, the narrative could have been different.

“… But you know that the enemies of progress will go all out to ensure people who mean well for the country will not have their intentions realised,” she said.

“Nonetheless, I want my presence here to ignite the spirit of Dr Nduom, which is the same as Dr Kwame Nkrumah, for us to merge. I am asking in all humility that all members of the PPP, your intentions are noble and as to why you left, we understand. Come home!”

Nana Kumankumah added that a unified front was the only panacea to unseat the governing NPP that had “failed to meet the aspirations of Ghanaians.”

Although the CPP could not make significant strides in previous elections, the masses were calling for the return of the party into governance, but the fragmentation, wrangling, and bickering were hindering its intended mission to move forward, she said.

She expressed disappointment over the disunity and bickering within the CPP and appealed to its leading members not to sit on the fence but to support in reviving its fortunes in the 2024 polls.

“We must work hard to organise the party and eschew all personal ambitions to ensure its progress, which I strongly stand for.”

The PPP in 2013 began talks with the CPP and the Peoples National Convention (PNC) for a possible merger.

It broke away from the CPP after its leader, Dr Nduom was accused of creating disunity in the party.

The CPP, a centre-left party, formed by Ghana's first President, Dr Kwame Nkrumah, has performed poorly in elections since the advent of the Fourth Republic.