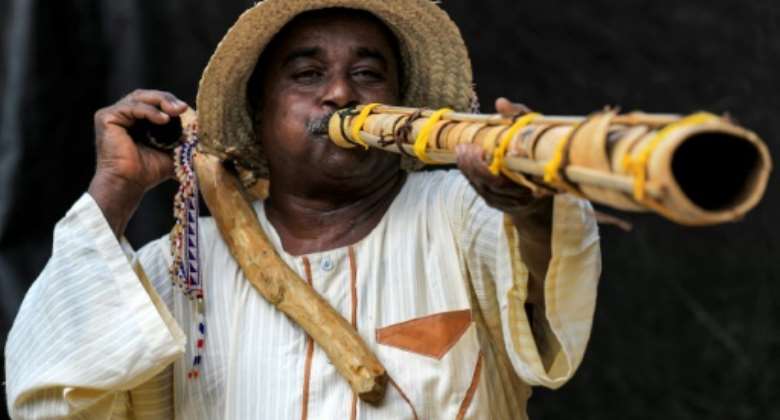 Locals have crafted a traditional horn-like instrument used for generations to usher in the harvest season. By ASHRAF SHAZLY (AFP)

Near the lush fields of his village in Sudan's southern Blue Nile state, Youssef Ismail has crafted a traditional horn-like instrument used for generations to usher in the harvest season.

"We make new wazza instruments every year," Ismail, in his 70s, told AFP about the wooden wind instrument that is often longer than a grown man.

"We learned this craft from our parents."

He assembled pieces of the conical gourd plant, meticulously cut and washed, to create a long trumpet with a bell-shaped end which produces a bright, loud and festive sound.

A set of traditional "wazza" instruments (R), and the "qarn" made from an animal horn (L top), and the "affeh" (L bottom). By ASHRAF SHAZLY (AFP)

In the village of East Ganis, like in some other Blue Nile communities, "we use it to celebrate the harvest season", which typically begins in November after the wet season, Ismail explained.

Agriculture is a major economic sector in Sudan, a country of 45 million people and one of the world's poorest.

About 43 percent of its labour force works in agriculture which makes up 30 percent of the economy according to UN and World Bank estimates.

After more than 120 people were killed in clashes over access to land in Blue Nile state in July, the wazza was also played to celebrate a halt in violence, resident Ahmed Idriss said.

Little is known about its history, but the wazza "has strong links to rituals performed by the communities of the Blue Nile", explained Mohammed Soliman, a music professor at Sudan University of Science and Technology.

Dafallah Ali Mustafa, 51, founder of the Sudanese Traditional Music Centre in the capital's twin city of Omdurman, has reserved pride of place for the wazza.

Dafallah al-Haj Ali Mustafa pours water down the pipe of the traditional "wazza" instrument to wet and soften it before playing. By ASHRAF SHAZLY (AFP)

Wazzas, which are particularly common among the ethnic Funj people in Sudan's south, vary in size, with some as long as two metres (6.5 feet).

The size of each instrument determines its tone range, and wazza players perform in a band of up to 13 members.

Some of the players would also use animal horns to tap their wazza for percussive effect.

Ismail, himself a member of a wazza band, said he expects future generations will carry on the tradition.

"We taught our children how to make and play the instrument," he said. "They will keep it alive after we are gone."