Is the Executive Director of ASEPA, Mensah Thompson, in the right frame of mind? 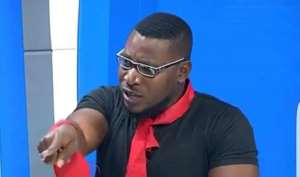 One of my WhatsApp contacts has forwarded to me a lengthy condemnatory write-up against President Nana Akufo-Addo by one Mensah Thompson, the ignominious Executive Director of the Alliance for Social Equity and Public Accountability (ASEPA). In this said publication, Mensah Thompson is mocking His Excellency the President, Nana Addo Dankwa Akufo-Addo, for looking on a written note to reproduce a statement of condolence for Her late Majesty Queen Elizabeth II, when he called at the British Embassy in Ghana to sign the condolence book opened for Her late Majesty Queen Elizabeth II.

Mensah Thompson challenged the mental faculty of the president, requesting him to resign since his failure or inability to write from his head a brief statement of condolence is an indication of his incapacitation. He went further to cite some constitutional clauses or articles elaborating on how a president of the republic of Ghana can be removed or replaced when proven to be incapacitated.

Does the incapability or inability to write a brief wish of condolence from one’s head make the person incapacitated? I pray the public to answer this question for me, being honest with themselves.

Could the public please tell me which of the two scenarios below dents the credibility of a person, making the person a disgrace to the womb that conceived him/her and an object of laughter?

1. A person who lies to the Ghanaian public about the president’s brother or cousin taking the presidential jet during the Christmas of 2021 (Covid-19 time), flying it out of the country to London full of his family members and friends to do Christmas shopping. The military came out to inform the Ghanaian public that the allegation by the person is false and that the presidential jet had for a long period not taken to air, thus, not been airborne, or flown out of the country hence the person making that false assertion must be arrested, investigated and arraigned.

2. A person who looks on a written sheet to copy what is written on the sheet into an opened condolence book in tribute to Her late Majesty Queen Elizabeth II.

The person in point number one above is Mensah Thompson, the Executive Director of ASEPA. As soon as the military ordered for his arrest to provide evidence for his false allegation, he came out begging that what he told to the public was never true but that he was only joking and on intent to cause public disaffection for the president. He started to beg the president and the military for forgiveness, crying and going on his knees.

How dare such a rogue, an NDC fanatic and activist, to call for the president’s resignation or removal from office because he looked on a written paper to copy into the condolence book his expression of sadness on the passing of Her late Majesty Queen Elizabeth II, as mentioned above?

This Mensah Thompson, had later to run to the church of Reverend Sam Korankye Ankrah of the Royal House Chapel, in the company of his other equally nonentity, Kwabena Bobbie Ansah, a journalist without substance but possessing a sharp lying poisonous tongue, to seek the face of God for forgiveness and protection.

The matter was made worse when Pastor Sam Korankye Ankrah, a fake man of God, and surely a devil incarnate, prayed the silliest insinuation-casting prayer I have ever heard since my adult life from anywhere of the world, for these two NDC criminals.

I was in Ghana in March 2022, watched on television that Sunday’s ministration by the pastor when instead of praying for forgiveness of sins from God for his two NDC criminal visitors, he rather stupidly collaboratively invoked curses on President Nana Akufo-Addo.

What had President Nana Akufo-Addo done wrong in the lies told by both the uncivilized NDC-infatuated rogues, Mensah Thompson and Kwabena Bobbie Ansah?

I invite the Ghanaian public to judge between both President Nana Akufo-Addo and Mensah Thompson, which one of them is unfit to be in the service of the country, considering their behaviours as stated above?