Breaching The Laws to Acquire Auction Cars: Exposure of AG against 19 current and former justices of Superior Court 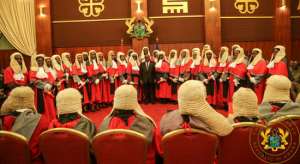 A regular caller by name John called into GBC Central Morning Show today in Cape Coast, 31st August, 2022 and asked the host "DC, are you aware that some Justices have been indicted by the Auditor-General for breaching rules governing the sale of auction cars?"

In bewilderment and not well apprised with the facts of the news, I answered in the negative and he added "I know you like reading so I shall stop hear, find out and tomorrow I shall call back to contribute on the matter" he ended.

Though hosting the Morning Show, I was eager to find out and had to quickly Google to ascertain the veracity of the claim made by the caller.

Lo and behold, I saw this Ghanaweb headline "Top judges paid as low as GH¢7,509 for auction cars - Auditor-General's report" amongst other links popped up. I Clicked on it and read. The caller was right and current than I was.

The lead of the GhanaWeb story has it that, "The Auditor-General has cited 19 past and present judges of Ghana's superior courts for acquiring state vehicles - a move that contravenes Regulations 158 of the Public Financial Management Regulations, 2019 (L.I. 2378)".

"This regulation provides that the Principal Spending Officer of a covered entity shall obtain the prior written approval of the Minister for the transfer, exchange, sale, donation, contribution-in-kind, trust and any other disposal of any vehicles of the covered entity (Ackah-Blah, 2022)"

Potions of Regulation 158 also states that any such disposal, lease and other action referred to in Sub-regulation 1 that is made without the written approval of the Minister, is void.

Thus according to the report “In the absence of approval from the Minister for Finance, we recommended that the auction should be nullified, and the vehicles recovered”.

The difficulty I have is this: how can Justices of the superior courts of Ghana breach financial regulations regarding the purchase of cars? Again, were the cars so cheap that in their haste to enjoy from the state largesse, they forget about the legal processes governing such activities? Or that, they were not involved in any of the processes but were only made to pay for the cars?

Notwithstanding the above, a political science lecturer of the University of Ghana, Dr. Kwame Asah-Asante is of the view that the Judges cannot be faulted for purchasing vehicles unlawfully. “I don’t blame the judges because they will apply, and [because] they want the right things to be done, once you say it’s okay you can buy, they can”. How can he come to such a conclusion when the act itself is unlawful?

We have to look at the policy itself; whether it’s worth maintaining. I think this policy is moribund. It must be jettisoned and thrown into the lake of fire. We don’t need this (Ansah-Asante, 2022)”.

The point to make is, these are men who are at the apex of justice delivery in our motherland and the rulings of the supreme court, if there are no precedents becomes law as ruled.

If the political science lecturer thinks that judges cannot be blamed but rather the system, couldn't they have done due diligence before making payments for the cars? These are men who retire on their salaries. Some of them have served on the bench for several years. Couldn't they have acquired cars of their own? Or the usual taking advantage of the state is what might have engulfed their minds?

In sum, it is very disturbing when our revered men of the bench act in ways that brings their name into disrepute. Whether it was their fault or not, I personally think that, being members of the bench, they ought to have known better and acted within the confines of the law.

Assuming without admitting that, they are not legally liable for any offence. What about the moral aspects too? If no wrong has been committed why would The Auditor-General recommend a nullification of the vehicles purchased and same recovered?

The report about our Justices purchasing auction cars illegally depicts us as a society whose moral depravity issues has reached alarming proportions and the earlier we look at it the better.

What again do you have for Ghanaians besides economic theori...
32 minutes ago