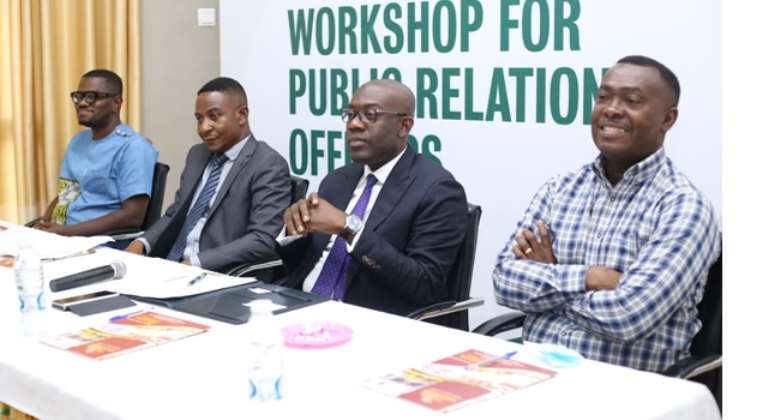 Government is working to retool and equip all its 600 Public Relations units across the country to effectively communicate its programmes and activities.

The Minister for Information, Kojo Oppong Nkrumah, announced this during an opening ceremony of a training workshop for Public Relations Officers at Tutu in the Eastern Region during the week.

The workshop is aimed at exposing the professionals to relevant, consistent, improved methods and skills to increase the performance of PR officers in the public sector.

“Every government organization must have a functioning Public Relations Unit without which, it is barely impossible to get the job done,” the information Minister said.

According to the Minister, the training was to ensure that officers updated their skills and also to maintain a qualified group of Public Relations professionals in the sector.

The Minister thanked the Ghana Institute of Journalism (GIJ) for accepting to train the officers and expressed optimism that the rich expertise of the resource persons would be brought to bear on the output of the officers.

The Acting Chief Information Officer, Information Services Department, Mr David Owusu-Amoah, tasked the PROs to get involved in the transformation programme of the Department.

Mr Owusu-Amoah lauded the effort of the Minister toward retooling offices with the requisite modern equipment to increase the output of staff. He said the training would bridge the skill gap of the PROs.

The Head of the Public Relations Co-ordinating Division, Mrs Ethel Ammisah- Cudjoe, called for attitudinal change among practitioners, especially on the use of its virtual reporting platform “Bonsu”.

“If you do not provide the required information on the Bonsu platform to aid the sector Minister and the PRCD to perform their work with ease, the essence of the training is defeated,” she opined.

Mr Mawuko Afadzinu, President of the Institute of Public Relations (IPR), encouraged PROs to connect, and build profitable relationships during the training to better their lots. He reminded them that they were the most important resources of their organizations and must be seen, felt and heard regardless of the limitations.

The five-day training programme would take the Public Relations Officers through varied disciplines including crisis and content management, media relations and monitoring among other important topics.