For how long will Ghanaians/Africans allow religion to ruin them as a people or a race? 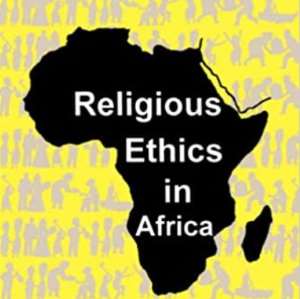 The black man’s misconception of Christianity and other foreign religions brought to their continent during the white man’s scramble for Africa has left an indelible damage in their brain. For their lack of comprehension of the religions and what they entail; how to apply the principles therein for the benefit of humanity and their countries, Africans, and especially Ghanaians, have left themselves and their doors wide open for exploitation by not only the more intelligent and superior whites but also, their own pastors and prophets.

I shall by limiting myself to Ghana and Ghanaians in this write-up, actually addressing the entire black Africans, if not the black race, since they all behave the same when it comes to their veneration of foreign religions at the expense of their own.

Call me anti-Christ, for all I care!

I am not disputing the bible as to whether its contents are from God, the Creator of Heaven and Earth. Assuming without admitting that the bible is not from God but the white man to deceive us, at least, it contains some moral principles the honest application of which could help us develop as a human race. But for the fact the Ghanaian is too naïve and mostly ignorant, lazy and devoid of intelligence, we have allowed our own fellow Ghanaians who are of course criminals, and portraying themselves as pastors and prophets, to misinterpret the bible to pave way for them to dupe us.

Does it make sense the incoherent noises they make purporting to be speaking in tongues? In Acts of the Apostles when the saints had gathered to pray, it said the Holy Ghost descended upon them and they spoke in tongues. They spoke in different languages other than their own and the speakers of such languages if they were around, could understand them.

Are the noises made at church services, or when Christians have gathered to worship or pray, the same as what happened on the Pentecost Day in the bible? No and No!

I hear every early morning or in the wee hours of every day on the Ghana radio during their morning devotion absolute rubbish purporting to be the speaking in tongues by those administrating the service. I cannot make a head or a tail of what they are saying. Is it how to worship God and is it what will take Ghanaians to Heaven?

Once in France and not far from where I lived, some black Jehovah Witness males and females went to the house of a certain white Frenchman to preach him the word of God. When they were let in by the house owner and were asked their mission, they started by saying, “We have come to you with the word of God today because very soon the world is coming to an end and we have the obligation to save souls for God”

As soon as they said the “world is coming to an end soon”, the white man chased them out of his house saying, “Go away, you lazy black people. For your laziness and inability to do anything sensible, you are always praying for the world to come to an end. Were the world to come to an end any time soon, we, the white people, will see it fifty years ahead. Are we stupid to be putting up all these tower blocks and factories that you see around you if the world was coming to an end soon? Leave my house now!”

Again, there was this occasion where a member of the Saviour Church of Ghana (the person’s name withheld), said he would not cultivate cocoa farm because the world is coming to an end soon and that the cocoa trees may not grow to yield fruits for him to enjoy before the world comes to an end. He lived several years after his statement, then died almost a pauper about fifty years ago. The world has still not come to an end since his death. This is how bad the bible is being misinterpreted by us to deceive and cause damage to ourselves.

Assuming I say, “Now I am writing this article for publishing”. This statement is in the present continuous, meaning, I am in the process of writing. When this article gets published, for the next hundred years that I am dead and gone, the statement will still remain as though I am in front of my computer writing the article. So are the contents of the bible written many centuries ago.

In present day Ghana, our criminal pastors and prophets do make us understand that certain names given to us are evil and must not be accepted. They claim certain names and people we name are children after do harm the future wellbeing of the children and as stupid as we are, we do agree with them, paving way for them to dupe us.

Does it make sense for a pastor or a prophet to charge you a fee before seeing them for prayers? No, yet Ghanaians do exactly that.

I had once been part of the congregation binding our ancestors for their ancestral curse come upon us but I do that no more. I don’t even go to church to hear such nonsense let alone, partaking in them.

It is not the religion per se that is evil to destroy Ghanaians but our comprehension and application of what it entails. In the name of religion, some present day Ghanaian pastors and prophets do kill people, rob people, have sex with other men’s wives and do all sorts of silly things unimaginable.

When at all will Ghanaians wise up to understand that our understanding and application of the numerous foreign religions in our country are the number one cause of our underdevelopment as a country and a people?

God may not be happy about the way we do worship Him to culminate in our impoverishment and denigration as a people created by Him.

Had it been the white race, how on earth could we see the glory of God to permit us to glorify Him?

Lazy Ghanaians, get off your ass, wise up and go to the ant to learn about his ways. If the insect is that intelligent, why should you a human being, behave as though you have water but not brain in your head?

Our criminal pastors have frightened us so much with the contents of the bible such that we cannot think, or reason properly, but to resign to fate and their manipulations for them to do to us whatever they like.

While they live in opulence at our expense, we live in utter penury. How wise that is?

Please fellow Ghanaians, I shall be back on this topic again and again until I see positive changes in you. Until then, brood over the messages contained in the two videos below. If you are ready to accept the veracity of the messages therein, you will never be the fool and easy target for exploitation by the so-called pastors and prophets. Shalom!