Ten years on: How the late Mills was betrayed by his own associates 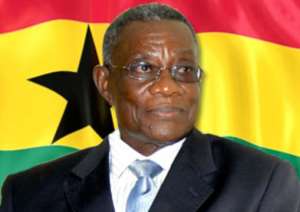 After two unsuccessful attempts, the late John Evans Atta Mills became president of Ghana on the ticket of the NDC on 7th January 2009.

Regrettably, his administration became ephemeral, as he mysteriously left the earth to the utter astonishment of the good people of Ghana.

Strangely, however, the Mahama administration was in power for more than four years following the demise and burial of the late President Mills and could not bother to take care of our former president’s tomb.

If you may recall, a few years ago, some family members of the late Mills bemoaned the appalling state of the late President Mills’s Mausoleum, popularly known as Asomdwee Park.

But for Koku Anyidoho’s ceaseless lobbying and the Akufo-Addo administration’s foresightedness, the late Mills Mausoleum would have been used as a refuse dump.

Absolutely, Koku Anyidoho has kept faith with the late Mills and it is a testament to his unfailing love and admiration for the late Professor.

Although I knew deep down in my heart that the erstwhile Deputy General Secretary of NDC and the Communication Director under the late Mills administration, Koku Anyidoho, has unbridled devoted attachment to the late President Mills, my belief increased exponentially upon Koku aptly conceiving and establishing an institute in memory of Mills.

Prior to Koku Anyidoho’s altruistic and conscious decision to establish the Atta Mills Institute, the consensus amongst the vast majority of observers was that the late President Mills has been neglected by Ghanaians, including his own (the Umbrella fraternity).

Back then, some of us, as a matter of honour, were extremely downhearted upon reading that the tomb of the late Professor John Evans Atta Mills had been in a deplorable state for years under the NDC administration.

Sometime in 2017, the Citi News reported that the well-crafted metallic cover of the tomb had developed grim cracks, apparently detaching itself from the rest of the artefact.

The report further revealed that portions of the tomb were also falling apart, and managers of the park had had to support it with blocks.

Gratifyingly, however, it took the Akufo-Addo administration barely a few months in office to begin refurbishment works on the late Mills’s decrepit tomb.

Following Citi FM's report on the deteriorating state of the tomb of the late President John Evans Atta Mills, the NPP administration commenced some repair work on the tomb at Asomdwee Park.

Koku Anyidoho had this to say: “I can confirm on authority that I have been there and I must say that we are pleased with the quick response of government. We saw workers on site.

“The tombstone was being worked on. It also looks like the lawn itself is being manicured”, said Koku Anyidoho (modernghana.com, 01/03/2017).

In fact, it is with deep sadness to state that the late Mills has been disappointed by some individuals(especially the Mahama administration), and the people who claim to love him so much.

If we stroll down memory lane, the late President Mills contested the presidency on three consecutive elections on the ticket of the NDC before winning the ultimate power in the 2008 second round election.

Despite the fierce resistance from the echelon of the NDC, the unwearied President Mills stood his ground and selected John Dramani Mahama as his running mate for 2008 election.

Suffice it to stress that the late President Mills did his utmost best until his sudden and inexplicable death on 24th July 2012.

Of course, the late Mills was not without infelicities. He had excellences and imperfections. Nonetheless his light shone among the voracious NDC apparatchiks.

Apparently, the late Mills was not on the side of corruption, and as a result, he earned himself more enemies than friends in the NDC.

It is on record that prior to the scandalous Wayome’s judgement debt payment, the late Mills warned the ‘create, loot and share’ cabals not to effect payment, and yet the conspiratorial plotters defied the good old Mills orders and doled out the staggering amount to Wayome, who had no contract with the government of Ghana.

It would, therefore, appear that there was a bad blood between the late Mills and some of the NDC officials.

For if that was not the case, how on earth would NDC government leave the tomb of one of their own in such an abhorrent state?

The alleged enmity between the late Mills and the echelon of the party may explain why they even obtrusively failed to recognise his achievements in their much publicised green book.

It would appear that the NDC apparatchiks are ungrateful towards the men and women who have worked strenuously to put the party on the map.

The NDC apparatchiks are indeed ungrateful. Take, for example, the party General Secretary, Johnson Asiedu Nketia, who was proselytised and christened into the Umbrella fraternity by the late Rawlings, once called him a barking dog, who is too old and fragile to contribute meaningfully to the cause of the party he (Rawlings) founded and autographed with his blood.

Moreover, the NDC’s boisterous brats (the babies with sharp teeth) who are not privy to their party’s history scolded former President Rawlings all the time for expressing his grievances over the rot in his party.

The ghost of the late Mills will take solace in the fact that his true comrade, Koku Anyidoho, has stood by him through thick and thin.

More power to your elbow, trusted comrade Koku Anyidoho; the ghost of the late Mills is indeed proud of you.