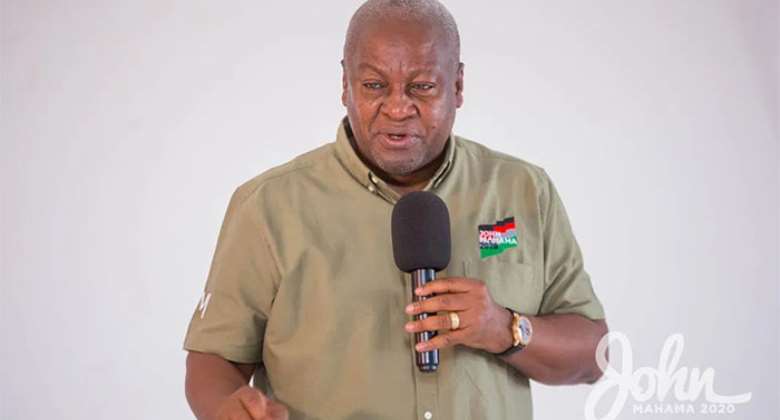 The 2020 flagbearer of the National Democratic Congress (NDC), former President John Dramani Mahama, says Ghana needs a new government to tackle its economic crisis, accusing the Akufo-Addo administration of proving to be clueless in managing the economy of the country.

According to him, the government has refused to do what is necessary to arrest the economic decline by allowing the suffering and pain of Ghanaians to aggravate and blundering into the belief that stability and normalcy will return as a matter of due course.

Speaking on the state of the economy at the inaugural launch of a policy think tank, Think Progress Ghana, in Accra yesterday, Mr. Mahama, who was defeated in the last general election, said the government had become impervious to the hardship in the country.

“It is apparent that even as the ship of state is being buffeted by the choppy waters of economic disaster, President Akufo-Addo and his head of the economic management team and his Finance Minister have no clue as to what direction to lead this country,” he asserted.

He continued, “The Akufo-Addo administration has refused to do what is necessary to arrest the economic decline. The suffering and pain experienced by Ghanaians do not seem to move the Akufo-Addo government to action.”

“They have convinced themselves somehow that by refusing to do the heavy lifting required, they can weather the economic storm and that stability and normalcy will return as a matter of due course,” he stressed.

Ex-President Mahama said the NPP government wrongly applied the nation's resources during the period of the 2020 election, thereby sinking the country into heavy debt, hence the economic challenges.

“The economic problem we are facing stems from imprudent election-related expenditure and reckless decision-making in the management of the economy,” he intimated.

“This also includes the way the windfall from COVID-19 was used. COVID-19 was an adversity but in adversity was opportunity. As a result of CoOVID-19, multilateral institutions gave us money. We took extra money from the Bank of Ghana and just misused it. That money would have cushioned this crisis that we are going through,” he posited.

Mr. Mahama teased the government that it was afraid to go to the International Monetary Fund (IMF) for policy credibility, insisting that the Akufo-Addo administration has no option than to turn to the Bretton Woods Institution for a bailout.

The government has said IMF bailout is strictly off the agenda, banking its hopes on domestic solutions to revive the economy, which is grappling as a result of the COVID-19 pandemic and the Russia-Ukraine war.

The economy has come under serious pressure from rising inflation, high cost of fuel, depreciation of the cedi and high cost of living, taking away the opportunity to access the international financial markets.

A previous $925.9m IMF bailout package under the Mahama administration brought a net freeze on employment in the public sector except in critical areas, as well as a 10% cap on the nominal increase in the total wage bill.

But the 2020 NDC presidential candidate said IMF bailout comes in handy since the programmes come with fiscal consolidation and fiscal discipline, which can lead to some recovery and improvements.

“In the last few days, there has been talk from some regime actors about a potential or impending IMF programme. Due to the nature and depth of our economic problems, this government virtually has no other sustainable option.

“IMF programmes come with fiscal consolidation and insistence on fiscal discipline which can lead to some recovery and improvements on the macro-economic front,” he maintained.

He added, “This government has, however, so mismanaged our economy and left it in such a terrible state that fiscal consolidation alone will not do the trick.”