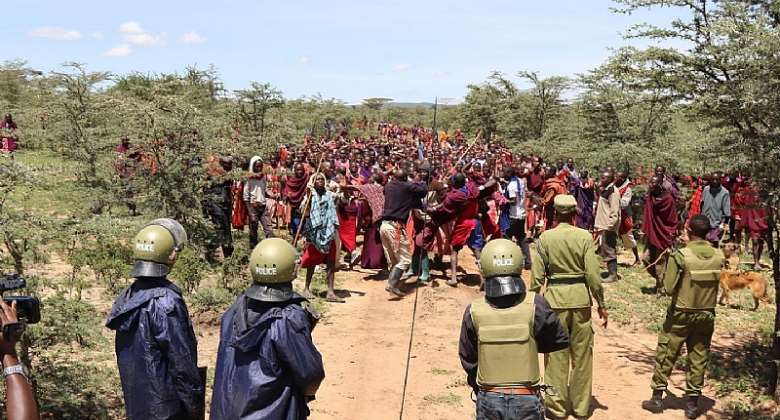 Tanzanian officers are forcing Maasai people out of their ancestral land in Loliondo, Ngorongoro District to build a game reserve.

Tanzanian authorities must immediately halt the violent forced eviction of the Indigenous Maasai community in Loliondo, and launch an urgent investigation into the security crackdown which has left dozens of people injured, many missing and a police officer killed, Amnesty International said today.

The organization is calling on Tanzanian authorities to end the security operation immediately, and suspend any land acquisition plans until the community has given their free, prior and informed consent in genuine consultations.

More than 70,000 Indigenous Maasai people are at risk of being displaced from their ancestral grazing lands to make way for a tourism operation. When Tanzanian security forces began the demarcation process on 9 June, community members began to protest by removing the beacons the security forces had set up. Protesters were met with massive use of force by security officers, and over the next two days dozens of people sustained injuries, including bullet wounds, according to media reports.

“This unlawful forced eviction is shocking in both its scale and brutality. The Tanzanian authorities should never have allocated this area to a private business without first consulting the Maasai community, whose livelihoods depend on their ancestral land. If this land confiscation goes ahead, the Maasai community’s livelihoods and way of life are in jeopardy,” said Deprose Muchena, Amnesty International’s Director for East and Southern Africa.

“Authorities must halt the ongoing demarcation and security operation in Loliondo, and begin genuine consultations with the community. They must ensure there are sufficient remedies offered to all affected persons and investigate the appalling violence which has taken place in recent days.”

Loliondo is a division in Tanzania’s northern Ngorongoro district, in Arusha region. It borders Serengeti National Park to the west, Ngorongoro Conservation Area to the south, and Kenya to the north.

In 1992 the Tanzanian government leased the whole of Loliondo division as a hunting block to a company from the United Arab Emirates.

The recent security forces operations is the fourth attempt to evict the Indigenous Maasai people who are pastoralists from their grazing site at Loliondo, in a dispute that has lasted more than a decade. Security forces were previously deployed in 2009, 2013 and 2017, when they evicted community members from four villages: Ololosokwan, Oloirien, Kirtalo and Arash.

On 25 September 2018, the East African Court of Justice issued orders which included explicit directions that the state ceases from evicting the Maasai Indigenous people until the determination of a case that the community had filed against the state was determined. The court is set to issue its judgement on 22 June 2022, barely two weeks before this exercise begun.

On 9 June, Tanzanian soldiers began using force to disperse community members who had gathered to protest the demarcation exercise by removing the beacons that the security had placed marking the boundaries of the 1500 square kilometers of land that the Maasai lay claim on.

According to two eyewitnesses, security forces started shooting at the protesters with live ammunition and also used teargas, injuring 30 people. Most of those who were seriously injured have crossed the border to Kenya to get medical treatment, though thousands are in urgent need of treatment and food supplies.

Dozens of people have been detained without charge since 9 June. They include nine councilors, a lawyer for the community, and the chairman of the district’s ruling Chama Cha Mapinduzi Party, who are all being held in unknown locations.

According to a lawyer representing community members, police denied holding these detainees when their families came looking for them, despite people witnessing their arrests.

Dozens more people are believed to be detained at Loliondo Police Station, where they have been denied legal representation and family access. Many other people from the Maasai community are also reported to be missing, while many others have fled to the nearby forest in fear of police reprisals.

“Perpetrators must be brought to justice in fair trials,”.

Ejisu Roman Catholic School gets water closet for the first ...
37 minutes ago