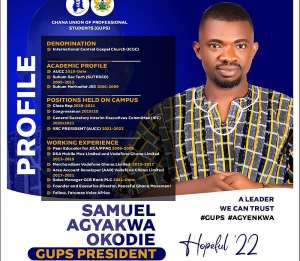 After vetting the 11 aspirants, Master Samuel Agyakwa Okodie, Presidential hopeful has been disqualified.

He was kicked out over alleged forgery of signature.

The Chairman of the Ghana Union Of Professional Students (GUPS) Vetting Committee, Hon. Issa Ahmed announced in a communique issued on May 10, 2022.

The communique further stated that Samuel Agyakwa Okodie, did not meet the requirements for the position he is contesting for.

It noted that the vetting process was designed to verify the applicant's academic credentials, general knowledge of current affairs and policies, and other requirements for a presidential candidate as spelt out in the constitution.

Master Samuel Agyakwa's, it indicated, problems started with a case of allegations of forgery of the signature of his school's Dean of student affairs.

The case, which was supposed to be forwarded to the Police Criminal Investigation Department (CID) for further probe, was withdrawn because the vetting committee chose to temper justice with mercy and onwards advised him to abstain from such criminal activities.

However, he was still not able to meet the requirements of the constitution, which were that at the time of his application he was still the SRC President of his school.

He again only has a month to graduate from school instead of a full year. And lastly, he was not able to attain the pass mark of 70%, which he got 65%.

As of the time of this publication, Mr James Senyo Ekissi, a presidential hopeful's case was still pending at the Judicial Board.

GUPS will go to the polls to elect its 20th president at the 20th annual delegates' congress at King's University on Saturday, May 21st 2022.