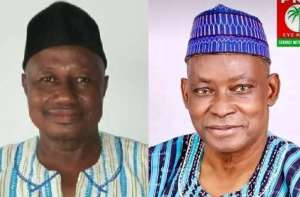 The People’s National Convention (PNC) has welcomed the court ruling directing the ousted leader and chairman, David Apasera and Moses Dani Baah to return to the party to seek redress.

It is recalled that on 7th September, 2021, the PNC removed David Apasera and Moses Dani Baah as Leader and Chairman respectively on grounds of misconduct and financial misappropriation.

The duo took the matter to court to seek for nullification of their removal.

The Party in its defense moved the court to direct the duo to use and exhaust the PNC’s internal dispute resolution to seek for their reinstatement. On Monday the 11th of April, 2022 the court upheld the motion and subsequently directed the plaintiff to go back to the Party to seek redress.

The PNC in a statement said it welcomes this directive from the court and has assured the plaintiffs that they will be given a fair hearing should they follow the court order and apply for reconsideration of their removal from office which was in pursuant to Article 49(a)4 of the PNC constitution.

The statement called on the rank and file of the Party to accept the court order, bury their differences and together continue to give their full support to the current leadership, led by Governor Bala Saliu Maikankan - the Acting Chairman and Leader, the General Secretary Janet Asana Nabla among others.

Regarding the onward movement of the Party, the statement noted that the leadership is scheduling a National Executive Committee (NEC) meeting to roll out and adopt time lines to conduct branch elections, constituency elections, regional elections and the national executives’ elections.