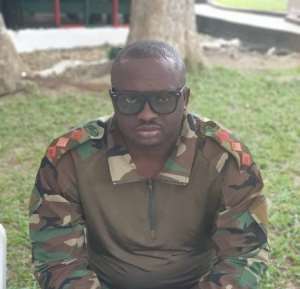 Surprisingly, both letters are saying two different things which is unfortunate. I thought as Security institutions if they wanted to lie , at least they could have both said the same thing, but they could not. The Military High Command per their letter want to correct a mistake which was done during the deployment of Military personnel to the Speaker's Office. Their letter supposedly say that the military personnel will be brought back after the mistake have been corrected. But National Security Letter is saying a total different thing. National security claim that the Speaker is not entitled to military personnel, so there is no problem on the withdrawal of the military personnel from the Speaker. Very laughable statement. But I sincerely believe that Ghanaians know the two institutions are telling us a lie.

Let me concentrate on the correspondence from National Security, which looks at people entitled to military protection. First and foremost, I must state that, the Commander in Chief of the Ghana Armed Forces (The President) can deploy the military to protect any citizen, such order cannot be questioned. The President can direct the military to give protection to any citizen, and the military have to follow the directive without asking any questions.

It is imperative to note that, as a result of the two scenarios above, that is why people like Ministers, chief Justice, EC chair, some paramount chiefs are sometime given military protection.

But my concern on why the military are revoking their long term culture, norm of providing security to the Speaker. Let not the military high command and national security forget that NDC has been in government before and they know the curtesy given to Speaker's Office. So why are they behaving as if this is the first time they are hearing of military protection for the Speaker.

So Ghanaian must now ask why does the Speaker not fall into that category, or because he is an NDC. I can not say the reason behind this decision but let leave it to the court of public opinion. I know one of the institutions is lying to Ghanaians.

My advice to the Speaker is that, moving forward, he must take his security detail very seriously, the Npp can never be trusted. He must get a trusted military or police officer to take charge of his personal security and security for his residence.