Desmond Tutu: The Archbishop With An Impish Sense Of Humour 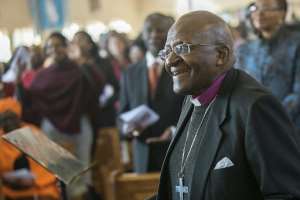 Archbishop Desmond Tutu of Cape Town, South Africa, who has just died at the age of 90, has a sharp tongue that took on the powerful of the world who gave comfort to the apartheid oppressors of Tutu's black South Africans. President Ronald Reagan of the United States and Mrs Margaret Thatcher of Britain were some of the leaders he berated most often.

Tutu had an impish sense of humour that enabled him to tell jokes about himself. One went like this: “Archbishop Desmond Tutu died and went to the gates of Heaven to seek admission. Peter denied him entrance and sent him down – to the warmer place. IN a few days, Peter heard a loud banging at the gates of Heaven. “Who's that?” he demanded, The answer came: “It's me the devil! You sent that Archbishop Desmond Tutu to me, remember? Well, he's caused so much trouble that I have come to seek 'political asylum' in yours!”

HAHAHAHAHAHA! laughed Bishop Tutu – taking the audience with him.

Bishop Tutu, who had, earlier in his life, not been much impressed by a Christian religion whose officials and leaders often acted in silent concert with the racist rulers, was alerted to different approaches to Christianity by the actions of one man, a white cleric called Trevor Huddlestone, whom Tutu and his mother met one day whilst walking along the streets of Johannesburg.

Huddlestone took off his hat and smiled in greeting to Tutu's mother. In a South Africa where black women were looked upon by whites as “inferior domestics”, Huddlestone's unusual attitude moved Tutu greatly. So although his father was a Methodist, it was into the Anglican Church that Tutu enlisted himself. He eventually got appointed him to the highest Anglican position in South Africa, Archbishop of Cape Town.

Tutu was born in Klerksdorp, about 100 miles south-west of Johannesburg, in 1931. His father was headteacher of a local Methodist school. Later on in life, when Tutu was hospitalised with tuberculosis, he was pleasantly surprised to find that one of his most regular visitors was a man he recognised as the same Anglican priest who had taken off his hat for Tutu's mother in the street, Father Trevor Huddlestone!

(By the way, Huddlestone similarly impressed many young blacks, including the musician, “Bro” Hugh Masekela. Huddlestone presented Masekela with a trumpet, which Huddlestone had obtained from the greatest jazz trumpeter of the time, Louis “Satchmo” Armstrong!)

In appreciation of Trevor Huddlestone's doings, Tutu actually named a son, Trevor, after Huddlestone. Huddlestone, humble though he was, achieved great fame by publishing a fierce book – Naught For Your Comfort – which was one of the first books to tell the world, in lurid detail, about the horrors that apartheid represented to South Africa's black population.

I am glad to say that I was privileged to meet Bishop Tutu on one occasion. It was (as could be expected) at a humanitarian event – a vigil held at Trafalgar Square, in London, in 1995, for the Ogoni writer and activist, Ken Saro-Wiwa, and eight other Ogoni environmental activists, who were murdered in a Nigerian jail by the Nigerian military dictator, General Sani Abacha. Their crime? Protesting against the ruination of Ogoni lands and waterways, by Shell Oil Company.

Bishop Tutu was also one of the South African leaders (the other was ex-President Thabo Mbeki) whom President Nelson Mandela sent to see Abacha to plead for the release from prison of the winner of the June 12 presidential election in Nigeria, Chief Moshood Abiola. Abacha made promises to both men to release Abiola. But he never fulfilled them.

Eventually, President Mandela was so infuriated by Abacha's recalcitrance that he gave me an interview, published in the London Observernewspaper, in which he described Abacha as a “cruel dictator, who had set up a kangaroo court to hang environmental activists!”

For his humanitarian work, Archbishop Tutu was awarded the Nobel Prize for Peace in 1984. The citation read:

“The Prize was awarded to Desmond Tutu for his role as a unifying leader figure in the non-violent campaign to resolve the problem of apartheid in South Africa....The means by which this campaign is conducted is of vital importance for the whole of the continent of Africa and for the cause of peace in the world.”.

The citation added that the Nobel Peace Prize had been “awarded to a South African once before, in 1960, when it was awarded to the former president of the African National Congress, [Chief] Albert Tulip.” The 1984 award “should be seen as a renewed recognition of the courage and heroism shown by black South Africans in their use of peaceful methods in the struggle against apartheid. This recognition is also directed to all who, throughout the world, use such methods to stand in the vanguard of the campaign for racial equality as a human right.”

It was the Committee’s wish that the Peace Prize now awarded to Desmond Tutu “should be regarded not only as a gesture of support to him and to the South African Council of Churches, of which he is leader, but also to all individuals and groups in South Africa who, with their concern for human dignity, fraternity and democracy, incite the admiration of the world”.

Bishop Tutu's proudest moment occurred when on 11 February 1990, Nelson Mandela was released from prison, and stayed with Bishop Tutu's family in Cape Town before making his way to Johannesburg. His relations with Mr Mandela remained warm, though they disagreed on some important issues, such as Nelson's divorce from Winnie Mandela.

Some South African activists blamed the Truth and Reconciliation Commission, set up (under the chairmanship of Bishop Tutu) after the African National Congress won the first all-race general election of May 1994) Many blame the Commission for not “doing enough” to punish some of the worst murderers of the apartheid regime. Dome killed thousands of blacks during, and many black South Africans feel that mere “confessions” and “expressions of regret” should not have gained exculpation (more or less) for such brutes.

Among the apartheid crimes most resented were those by secret security forces personnel, who killed blacks and camouflaged their murders as “black-on-black violence”.

Also resented was the fact that the Truth and Reconciliation Commission remitted to an ordinary court, the trial of a notorious white doctor (nicknamed “Dr Death”) who had specialised in developing drugs that would kill “only blacks”. That Dr Death” (Dr Wouter Basson) was allowed to be tried by an ordinary court, which allowed him to exercise the rights of normal defence, and is currently still practising medicine, has left a sour taste in the mouths of many.

But maybe it was not Archbishop Desmond Tutu's fault so much as the fault of the euphoric atmosphere under which blacks were tasting power in South Africa for the first time, and were persuaded by the white-owned media that “forgiveness” had to be “the order of the day”.

Whatever one thinks, one must remember that Archbishop Desmond Tutu truly believed that one must never allow oneself to “behave as one's enemy would!”

Nkoranza youth court case: Police have proven that TV sets a...
31 minutes ago