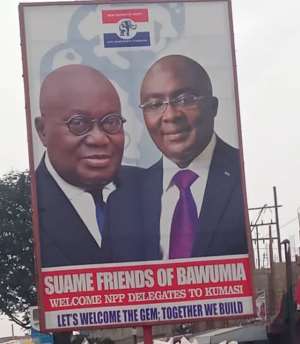 A group calling itself Pro Alan Group has called on Council of Elders of the New Patriotic Party (NPP) to bar Dr. Mahamudu Bawumia from contesting in any future elections in the party.

According to the group, the Vice President has exhibited gross disrespect to directives of the party ahead of the conference.

In a release, the group claim Bawumia defied the party directive banning candidates or their supporters from hoisting or showcasing billboards or posters.

They alleged that another group of the NPP calling itself "Friends of Bawumia on Saturday displayed posters in the city in the full glare of national executives.

"The silence of the Executives is very problematic," the group stated.

In view of this, it's calling on the Council of Elders of the party to disqualify Dr. Bawumia from contesting any elections in the party.

"We therefore call on the Council of Elders to call the Vice President and his supporters to order and protect the sanctity and integrity of the great NPP," they emphasised.

Obedience they say is better than sacrifice. It is very disheartening to see how a group known as FRIENDS OF BAWUMIA is blatantly disregarding the directives of our party in relation to the display of posters and Bill boarding in greater Kumasi as part of the New Patriotic Party's annual delegates conference statutes.

It will be recalled that the party issued a directive that no candidate or their supporters should engage in littering the beautiful garden city of Ghana with Bill boards and posters. The only exceptions that we all agree to without an iota of complain (though unfair) is posters from the seat of government or the NPP as a party.

However these new comers to the NPP are blatantly abusing the party's rules with gross impudicity and disrespect .Amazingly, this unpatriotic and careless act of the said group is being done in the full glare of National Executives, without fear or any restrain. The silence of the Executive is very problematic.

We the true patriots who have the love and unity of our great party at heart are calling for the disqualification of Dr. Bawumia from contesting in any party elections, as stipulated in the sanctions of the directives on the display of posters and Bill Boards.

Even though we do not have the slightest doubt that Hon Alan Kyerematen will win the NPP flag bearer contest on any day even if the flagbearaship election is held at the backyard of the Vice president, our concern has got much to do with the bad example set by the Bawumia-camp and the disrespect and reckless disregard for party unity and disciplinary measures.

We therefore call on the Council of Elders to call the Vice President and his supporters to order and protect the sanctity and integrity of the great NPP.

We shall ensure the return of the days of glory of the NPP, where Unity, was the fabric that ensured Development in Freedom

Bold to defend forever, the cause of freedom and of right.

'Parties must have functioning offices, file their accounts ...
21 minutes ago