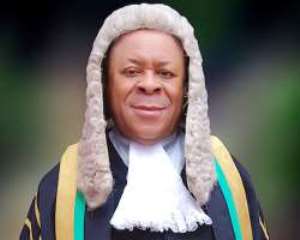 Legal bodies like the Nigerian Bar Association (NBA) and the National Judicial Council (NJC), are supposed to be the conscience of Society. The Nigerian Judiciary with its practicing lawyers, magistrates, presidents, judges, and Justices are all admitted to the bar in Nigeria and through their membership to the Nigerian Bar Association they should always engage in the promotion and protection of human rights, defend the rule of law, and help expand good governance in Nigeria.

The National judicial council as part of its judicial functions is supposed to carry out disciplinary measures in a timely manner on erring members of the judiciary.

Judicial officers should generally show respect for the legal system and for those who serve in it, including magistrates, judges, and justices. Qualities of fairness, openness, trustworthiness, and respect for the rights of others are always expected.

No member of the bar, no matter their status, justices in particular should be evidencing unbecoming or unethical conduct.

They must generally act in a manner that does not give the appearance of a badger, an abuser, or a tormentor.

The apparent description of Justice Okon Abang’s behavior towards lawyer Andrew Obido Esq, showed that he was engaging in offensive, abusive conduct, including work harassment or contemptuous acts.

Could it be by way of personality style that this is how he sometimes behaves towards litigants, lawyers, court employees, or others in a noticeably egregious and hostile manner? Thereby creating a hostile work environment for lawyers and judicial employees.

In recent times, Nigeria has become very undisciplined and almost unruly institutionally, and those that occupies higher seats in the courts are expected to be able to rise above unethical environments.

If we were to go by what I call the Falana judicial leadership observations (FJLO), some of the Falana representations showed that the NJC and/or NBA management are sometimes marked with judicial corruption, diminished by self-serving behaviors, immersed in fighting, and has generally failed to fully arrest non-professional attitudes of some judges and in some cases look away as foolhardy judges and justices intimidate some lawyers.

On a psychological level, magistrates, Judges, and justices are professionals charged with upholding the ultimate standards of personal and professional conduct.

A psychological face value study of these personalized and official descriptions of the man, point to an apparent pattern of extraordinary behaviors and ways. Especially for a jurist.

In the last few hours Abang, now a serving justice in Warri, was called out by the leadership of the NBA, Warri branch as a judicial officer that demeaned and punished an aged lawyer, Andrew Obido Esq, by ordering him to stand up and face the wall like a junior-grade school student for certain amount of time. Who does that?

From the point of abusive acts, while the physical standing and facing the wall are humiliating but not as much as the marked embarrassment of a professional elderly man being on display for a certain time in front of onlookers in a courtroom. For what?

In essence, what Abang reportedly did to another member of the bar, amounts to inhibition of Obido’s individual rights of movement and expression. A trial judge showing his antagonism, hostility, and prejudice towards a member of the bar. A judge abusing his position by being unjustifiably rude, hostile, and unfairly abusive towards a lawyer. Abang’s actions to the lawyer amounts to psychological brutalization as the victimized lawyer was described as an elderly man.

Currently, how would Abang justify his reported emotional abuse, and willfully causing another lawyer like himself to suffer, become marginalized, and inflicted with unjustifiable physical pain or/and mental suffering openly?

Could Abang be acting out, or engaged in abusive depictions and expressions which are being triggered by inner toxic or enduring stress given his recent experiences as outlined in the above headlines?

Given Abang’s peculiar behavior he could he be struggling with deep anger, hostility, pain, and inner apprehension?

As points of remedy, one way to take away temporary control from Abang is by boycotting tactics, and refusing to allow lawyers to pursue old, new cases in his courtroom. Engage in direct action protests for his long standing reported notorious behaviors.

The NBA and NJC could induce apology from Abang. He could say openly, ‘I made a mistake. It will not happen again’. But does the NBA or NJC have the confidence and real independence to openly inform Abang that he acted improperly and had violated court rules of correct behavior?

As humans we all make mistakes. We all go through stress. Therefore, I recommend significantly that Abang be ordered to partake in some sort of interpersonal stress/anger management class or counseling as this could safe him in his current capacity as a professional and a citizen. Sir. Oga, goodluck.

John Egbeazien Oshodi who was born in Uromi, Edo State in Nigeria, is an American based Police/Prison Scientist and Forensic/Clinical/Legal Psychologist. A government Consultant on matters of forensic-clinical adult/child psychological services in the USA; Chief Educator and Clinician at the Transatlantic Enrichment and Refresher Institute, an Online Lifelong Center for Personal, Professional and Career Development. A former Interim Associate Dean/Assistant Professor at the Broward College, Florida. The Founder of the Dr. John Egbeazien Oshodi Foundation, Center for Psychological Health and Behavioral Change in African settings. In 2011, he introduced the State-of-the-Art Forensic Psychology into Nigeria through N.U.C and the Nasarawa State University where he served in the Department of Psychology as an Associate Professor. The Development Professor and International Liaison Consultant at the African University of Benin, and a Virtual Faculty at the ISCOM University, Benin of Republic. Founder of the Proposed Transatlantic Egbeazien University (TEU) of Values and Ethics, a digital project of Truth, Ethics, Openness. Author of over 40 academic publications/creations, at least 200 public opinion writeups on African issues, and various books.