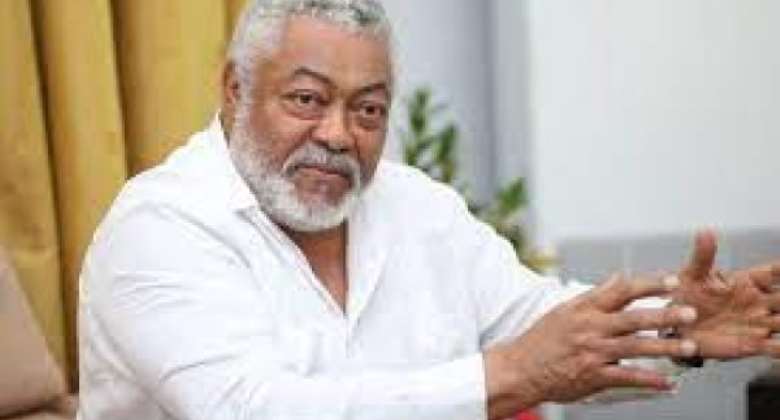 Ghana's Parliament has observed the one year passing of former President Jerry John Rawlings, the First President of the Fourth Republic of Ghana on Thursday, November 12, 2020.

The House recalled his enigma, bravery, nationalism, and sacrifice to the nation.

“As we mark the first anniversary of his death today, it is only proper that we continue to celebrate him for his immensely significant contributions to bringing our nation to the place where we are today,” Mr Kofi Adam, a former aid to the late President, and Member of Parliament for Buem, said on the floor of Parliament.

He read a five-page commemorative statement to eulogise the former President, who would have turned 74 this year, as a multi nationalist, trailblazer, and powerful voice for developing nations, recalling his contributions to Ghana, Africa and the rest of the world.

Significant among Rawlings' foresight, against all odds, Mr Adam said, was the extension of electricity to the hinterlands, enhancing grassroots participation in democracy, and reducing the voting age from 21 to 18 at the local level elections in 1988.

That also enabled the youth to be engaged more in in the governance process.

“President Rawlings gave thousands of people, otherwise marginalised nationwide, the opportunity to participate in the decisions that affected their lives as well as the development of their local areas,” Mr Adam said.

He anticipated that there would be more application of the Directive Principles of State Policy for equal and mutual obligation of the state to its citizens.

Mr Adam eulogized the former President Rawlings for instituting legal reforms that enhanced spousal rights after death, insurance regimes for victims of motor accidents, as well reforms in the education and health sectors.

He was a symbol of excellence of the Ghana Armed Forces and to several world leaders, a powerful voice for small developing nations, a champion for the underprivileged, compassionate for the ordinary, fighter for social justice, and voice of the voiceless, and adopted a people-centered approach to issues.

In conclusion: “May the spirit of Jerry Rawlings be our guiding light. May his soul rest in perfect peace!”

Madad Zuweira Ibrahima Mohammed, the MP for Salaga, described the late President Rawlings as a “thorough statesman” who managed to navigate the field of being a ruler to become the most successful president.

She recalled his sense of discipline, punctuality and his down-to-earth nature.

Mr Samuel Atta Akyea, the Abuakwa South MP, said despite being from the opposite side of the political divide, former President Rawlings contacted him for legal service, with regard to a publication by Professor Kwaku Danso Boafo, a former Minister of Health, under the Rawlings Administration, which he (late President) did not agree with.

Mr Atta Akyea said Rawlings asked him how much his fee was, but he declined to charge a fee as a fee would in no way match the services the former President had rendered to the nation.

Later, when he was going for his primaries, Rawlings offered him financial help and gave him his blessings, adding; “I won a landslide victory.”

“The example of this great man will help everybody to see what it takes to serve the nation.”

Latest Photo Reports
Catch up with all the political quotes from our politicians.
Advertise here
More Parliament
ModernGhana Links
Parliament to reconvene on January 25
MPs must trust one another – Methodist Bishop
Consideration of budget estimates for EC, Communications Ministry put on hold
Parliament to begin sittings on Mondays for speedy passage of appropriation bill
Confusion in Parliament over adjournment date
Heated debate as Minority moves motion to set aside approval of 2022 budget
Rejected 2022 budget to take center stage in parliament today
Today is 'do or die' as Parliamentary ends debate to vote on 2022 budget
Minority vex over Finance Minister, deputies’ absence at 2022 budget debate
TOP STORIES