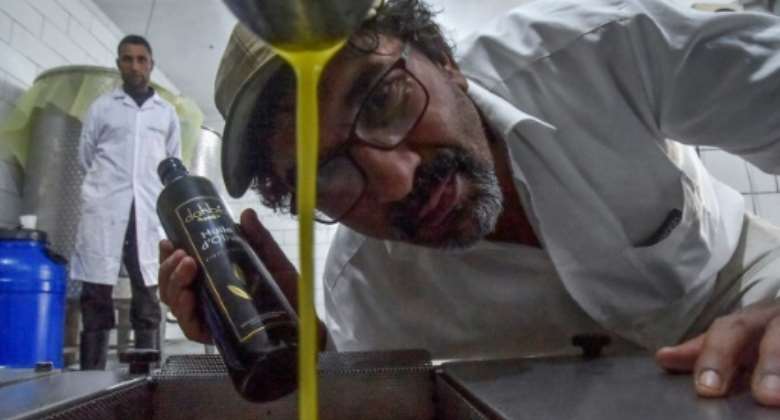 Hakim Alileche inspects a dripping batch of his prize-winning organic olive oil at the press. By Ryad KRAMDI (AFP)

Hakim Alileche left a successful career in graphic design and moved to the Algerian countryside to produce "magic potion" -- organic olive oil that has won him international recognition.

The 48-year-old says he chose the Ain Oussera plateau for its cheap land and water supply.

His oil won first prize at the Dubai Olive Oil Competition in the Extra Virgin Early Harvest category in February 2021 and in May he won silver at the Japan Olive Oil Prize.

"These honours really reassured us because it means we were right," he said.

The olives are harvested earlier than on other farms, which Alileche says allows for "all the natural antioxidants". By Ryad KRAMDI (AFP)

"I started planting them bit by bit from 2005. I like farming and I've been fond of olive trees since I was little," he said.

Producing organic olive oil "puts me right into this mood of respect and protection for the planet," he said.

He has visited several other producing countries -- Bosnia-Herzegovina, Greece, France and Italy to learn about production methods.

Alileche stands in his grove during harvest -- the trees have never been treated chemically, he says. By Ryad KRAMDI (AFP)

"These trees have never had any chemical treatment and I will do everything to make it stay that way," he said, clasping a goblet of oil freshly extracted from his modern Italian press.

"It's really food and medicine," he said, taking a sip of the fragrant liquid before heading out to supervise workers harvesting olives in the orchard.

As with every year since entering into production, Alileche is picking his olives early, in a country where the harvest doesn't start until mid-November.

"An early harvest allows you to get all the benefits of the olives, all the natural antioxidants," he said.

A worker scrapes olives by hand from the branches to avoid damaging the trees. By Ryad KRAMDI (AFP)

The olives are scraped off the branches by hand to avoid damaging the trees, and fall on a tarpaulin on the ground to then be scooped into crates and hauled off to the press.

Picked this early, the olives give a meagre amount of oil -- just eight litres per 100 kilogrammes (14 pints per 220 pounds). That compares to 18 litres for fully mature fruits.

"Our oil is a very high quality that we want to get certified in Europe" as organic, Alileche said.

He has labelled his oil Dahbia, the name of both his mother and his wife.

The production process "respects the entire ecological system: no pollution, no fertilisers".

The oil's free acidity -- a measure of quality whereby the lower the figure, the better the oil -- is 0.16 percent, just a fifth of the 0.8 percent limit for Extra Virgin oil.

An employee shows a handful of olives at the press ahead of oil production, which Alileche says "respects the entire ecological system". By Ryad KRAMDI (AFP)

"At the mill, we don't touch the olives much," he said. "We wash them, press them and finally bottle the oil."

That breaks with more traditional practices, he added.

"Before, people wouldn't wash the olives and they would sit exposed for long periods in bags in the open air, which changed the taste of the oil."

Alileche's farm benefits from a drip irrigation system, but he fears that climate change could threaten his livelihood, bringing both drought and early summer hailstorms.

"A quarter of an hour of hail and it's all gone," he said. "You'd have to wait five years for the olive tree to recover."