RE: All Ashanti lands belong to Otumfuo Osei Tutu II with all other Ashanti chiefs being simply caretakers to the lands they occupy and with no family-owning lands in Ashanti 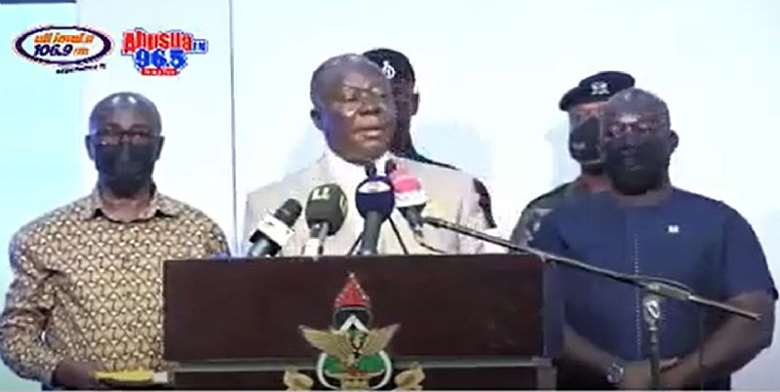 This publication is in rebuttal to Asantehene Otumfuo Osei Tutu II’s statement made on Thursday, 28 October 2021, as reported by the Ghana media. He made the statement while addressing the mammoth audience gathered on the campus of Kwame Nkrumah University of Science and Technology (KNUST) in celebration of the 70th anniversary of the opening or founding of the school.

Asantehene Otumfuo Osei Tutu II is the current Chancellor of the University.

He said, “no family or community owns any land in Ashanti as per both the Ghana and Asante constitutions. All Ashanti lands are his, thus Asantehene’s, with the appointed chiefs by him being merely caretakers of those lands in his behalf. Therefore, no chief, family or family head (Abusuapanin) in Ashanti region can alienate any part of the KNUST lands to anyone in the false belief that the land is theirs”. Whoever does contrary, will have to face his wrath, he said.

His statement made amid threats to deal ruthlessly with whoever dares to violate his declaration, was received with applause by the congregants.

When I heard his statement as captured on camera, I felt the need to come out to disprove his sweeping statement so made. His statement in regard to there being no family or community lands in Ashanti region and that all the chiefs in Ashanti region are appointed by him and are all mere caretakers of Ashanti lands in his behalf is not true, if not frivolous or reckless.

The public is requested to note that:

If you are the owner of something and have appointed someone to take care of it in your behalf, you can claim that thing back at any time you want. Am I right? Should the person hesitate to give that property you have entrusted to him or her as a caretaker back, when you urgently need it, you surely will have the right to use force or go to court to claim it back, right?

Can Asantehene Otumfuo Osei Tutu II, use force or go to court to claim any of the lands occupied by Juabenhene, Mamponghene, Essumjahene, Nsutahene, Kokofuhene, Kumawuhene and or, Bekwaihene, just to mention a few, as his? No, he has absolutely no such constitutional or customary right.

For record purposes, I want the public to note that I, the writer, Rockson Adofo, is a native of Ashanti. I come from Kumawu in the Ashanti region by the roots of my father’s and from Juaben in Ashanti region by that of my mother’s. Therefore, I am speaking as an Ashanti who is knowledgeable about the history of land ownership in Ashanti.

Unless Asantehene Otumfuo Osei Tutu II tells me that Kumawu is not part of Ashanti region, I will insist that there are family lands in Ashanti region, going by the court’s verdict declared in favour of Opayin Yaw Amponsah.

Again, on my father’s side, he, or his matrilineal family, owns farmlands in Dome, Apopotia, Kwayemu, and other places in Kumawu Abotanso. On my mother’s side, we own family lands in Awronya, Abromu, etc. in Juaben. There are other families in Ashanti region that can attest to owning family lands in Ashanti region as against the contrary claims by Asantehene Otumfuo Osei Tutu II.

b) Sir Francis Fuller (1866-1944) was the British Chief Commissioner of Ashanti from 1902 to 1920. He demarcated the Ashanti land among the various paramount chiefs. The paramount chiefs became the owners of the lands as were demarcated to them and mapped out with the supporting Fuller Pillars.

c) “A document of Draft by the Ashanti Confederacy Council signed on 21st day of March 1938, states among other things thus, “Arising out to the Council discussion on Item 7 of the Agenda, the following declaration of custom is submitted to the Council for discussion and for signature if approved”.

1) “All land in Ashanti is the property of the stools of the various chiefs.”

How then can Asantehene Otumfuo Osei Tutu II shamelessly ignorantly but in a tactically-bullying manner claim that all Ashanti land belongs to him?

d) From the minutes of the ASHANTI CONFEDERACY COUNCIL OF WARRINGTON NOTES ON ASHANTI CUSTOM by J. N. Matson, L. L. B, Ag. Judicial Adviser, it states under LAND, subtitle (a) Capacity to own; rights capable of being owned; transfer of rights.

It is stated among others thus: (80) It was unanimously agreed that “the ownership of all lands in Ashanti is vested in the various stools; individuals enjoy only surface rights but the land itself is vested in the stool.” (82) In 1938 a “declaration of custom” in the following terms was approved: “All land in Ashanti is the property of the Stools of the various Chiefs”

Further to my submissions to proving the fallacy of Asantehene Otumfuo Osei Tutu II as being the sole owner of the entire Ashanti land with all other Ashanti chiefs being caretakers of the land they occupy, in his behalf, I will refer to the Ghana LAND ACT, 2020, Act 1036 clauses 2, 5 and 9.

(i) the highest or ultimate interest in land; and

(ii) held by the State or, a stool or skin, or clan or family or an individual;

and may have been acquired through compulsory acquisition, conquest, pioneer discovery and settlement, gift, purchase or agreement.”

Usufruct is an interest in land, which is

(i) (i) acquired in the exercise of inherent right by a subject or a member of a stool, or skin or family or clan which holds the allodial title through the development of an unappropriated portion of the land of the stool or skin, or family or clan or by virtue of express grant; or (ii) acquired through settlement of period not less than fifty years, with the permission of the holder of allodial title by a non-indigene or group of non-indigenes, except where the settlement is on agreed terms; and

CLAUSE 9: - Stool or skin, or clan or family land

(B) A person shall not create an interest in, or right over, any stool or skin, or clan or family land which vests in that person, another person or a body of persons a freehold interest in that land, howsoever described.

(C) Subsection (2) does not take away the inherent right of a subject of a stool or a skin, or a member of a clan or family to the unsufuctuary interest in a vacant portion of the stool or skin, or clan or family land.

The term ‘Allodial’ is derived from the German word ‘alod’ or ‘allod’ which means absolute interest or original heritage’.[1] Historically, allodial pertained to land owned by a person without any feudal obligations or held without acknowledgement of any superior. Under customary law, allodial title is the highest title in land usually owned by a stool, skin, clan or family.[2] In 1921, the Privy Council held per Lord Haldane thus: “Individual ownership was foreign to native ideas, and that land was vested in communities or families, but not individuals.”[3] – Wikipedia.

Allodial title can therefore be said to be the mother of all interests in land. In the 1999 National Land Policy document by the Ministry of Lands and Forestry, it was captured thus: “Fundamentally, land ownership is based on absolute “allodial” or permanent title from which all other lesser titles to, interests in, or right over land derive. Normally, the “allodial” title is vested in a stool, skin, clan, family, and in some cases, individuals.”

From my further researches to proving Asantehene Otumfuo Osei Tutu II wrong beyond any shred of doubt, I came across the topic “(Ghana: Information on the line of succession of land in an Ashanti tribal/clan area cultivated by the chief; on who would have the right to work or own the land, for example, would his children and/or siblings)”, and the question, “Who has the right to claim the land or property in Ashanti tribe?”

The answer given among others is, “Title to this land remains with the family who gave it to the chief in trust (ibid.). Stool property always remains the property of the chieftain and is held in trust for the community unless the community otherwise decides to dispose of it (ibid.).

What is “Ibid.”, one may ask? “Ibid. is an abbreviation for the Latin word ibīdem, meaning "in the same place", commonly used in an endnote, footnote, bibliography citation, or scholarly reference to refer to the source cited in the preceding note or list item”.

From “A Presentation on Stool Land Administration in Kumasi by Nana Kwasi Prempeh, Manhyiahene and Liaison Officer of Asantehene’s Lands Secretariat”, he states thus;

Under point number 2, he specifies the coverage of Asantehene’s Lands and goes on to employ the phrase “pockets of lands” all over the remaining 20 districts within Ashanti region for the Golden Stool. This statement coming from his own Secretariat, on its own, does negate Asantehene Otumfuo Osei Tutu II’s cantankerous claim that all Ashanti lands belong to him.

This statement could well be a similitude of the proverb, “coming from the horse’s mouth” which is explained as, “If you hear something (straight) from the horse's mouth, you hear it from the person who has direct personal knowledge of it”

I even doubt the Golden Stool has pockets of lands all over the paramount divisions within Ashanti. However, this will be another topic for future discussion.

Finally, if Asantehene Otumfuo Osei Tutu II, being the indisputable paramount chief of Kumasi division within Ashanti region or Asanteman, and the ceremonial head of Asanteman Council, formerly the Asante Confederacy, had claimed total ownership of Kumasi divisional land, I would have had no qualms about it, notwithstanding the fact that there may be pockets of family or clan lands in Kumasi.

It could never happen that there are no parcels of land in the Kumasi division which do not belong to certain chiefs who are indeed not caretakers of such lands in behalf of Asantehene, or to clans or families, similarly as are within all the other divisions in Asanteman or the districts of Ashanti.

How I hope the media will carry this informative and evidence-rebuttal publication with the same zeal as they did disseminate that of Otumfuo Osei Tutu II.

This publication will swiftly be followed by a second one.

Let’s come together to build a resilient, prosperous society...
34 minutes ago