A poor Liberian found US$50,000 and returned it to the owner 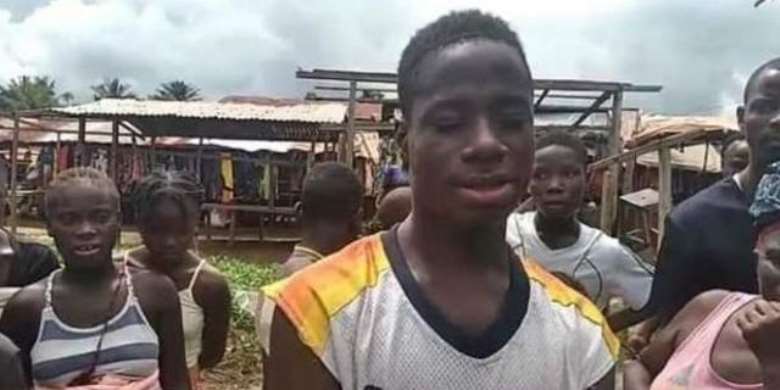 Emmanuel Tolue, an 18-year-old teenager from Nimba County in Liberia, found US$50,000.00 while riding a motorbike near the Gblor Dialla Township in the county and returned the money to its owner Madam Musu Yancy. Many Liberians, including President George Weah, have hailed Emmanuel's action as a mark of high honesty and integrity.

According to Emmanuel, while riding the bike he found the money wrapped in a plastic bag on the road. He opened the bag and saw US$50,000.00 cash plus 100,000.00 Liberian dollars. He took the money and gave it to his aunt for safekeeping until the owner is located. At the same time, Musu Yancy went on public radio and pleaded to anyone who finds the money to report it. Upon hearing the announcement, Emmanuel reported to Madam Yancy, a businesswoman who was traveling to Guinea to buy goods. It was stated that the owner rewarded Emmanuel $1,500.00 as a token for his honesty. Like most Liberian youths, Emmanuel uses the bike as a means of employment riding passengers to their destinations. He is said to have dropped out of school in the seventh grade to ride motorbike in order to help support his family.

While many Liberians praised him for his action, some considered him a stupid man for returning the money. They said that they would have kept the money if they were the founders. His critics included some of his neighbors, mocking him and saying that he would be poor forever. Their view perhaps is based on the reality that Liberia is one of the poorest countries in the world and that the average Liberian lives on less than $1.25 a day. Thus to them, finding a large sum of money would be a visa to flee from poverty. However, Emmanuel said his decision was guided by the principle imbibbed in him by his poor parents. That is, despite his poverty, he should not take what does not belong to him.

On October 18, 2021, President George Weah invited Emmanuel to the executive mansion and praised him for his honorable behaviour. In appreciation, the president gave him US$10, 000.00, two new motorbikes, a $500.00 monthly allowance, and a scholarship to a Master's degree level. To many Liberians, Emmanuel's behaviour is a demonstration of integrity, which will be remembered. It speaks to the conscience of the people and the nation.

At the ceremony, President Weah expressed that at the next national investiture event, Emmanuel “will be recognized and honoured with one of Liberia’s highest Orders of Distinction for (his) honesty”. The President considered Emmanuel’s behavior to represent what the Bible says “in Proverbs 22:1 that a good name is rather to be chosen than great riches”. Weah threw further light on the financial conditions under which Emmanuel lived. He said:

“This honest behavior on your part is even more amazing when seen against the backdrop of your personal circumstances.….I am made to understand that you are in the 7th grade with no money to continue your education; that you have no means of income except to occasionally borrow a motorbike from one of your friends when he is off-duty in order to earn a few dollars to sustain yourself”.

President Weah did well as head of the nation to recognize and honor Emmanuel's integrity. Thanks to the President for the gestures, especially the award of a scholarship for Emmanuel's education and future development. Emmanuel received more than the money found. The aunt who kept the money for Emmanuel should also be praised for holding the money faithfully and not encouraging him to act otherwise.

While a report alleges that one Emmanuel Thorp was with Emmanuel Tolue when he found the money, the fact is that the money was returned to the owner and the demonstration is of fine character. If the report is true, Tolue can give part of the financial reward to Thorp and to the aunt. The Associated Press stated that Emmanuel said: “he will share the reward with some of those who were traveling with him on his motorbike”. That is great.

Honesty and integrity are internal virtues for personal and national development. They cannot be learned in school, and neither can they be bought. They go beyond wealth and power and live forever. Had Emmanuel kept the money, his conscience would have bothered him, and the money would not last for long. But by doing the right thing, he has kept his conscience and principle intact. Moreover, the commendations and the intended results of the educational opportunity will be with him forever. All Liberians and humankind, particularly public servants, need to emulate Emmanuel by not taking what does not belong to them and withstanding temptations and any act of corruption.

Emmanuel is indeed a national hero!