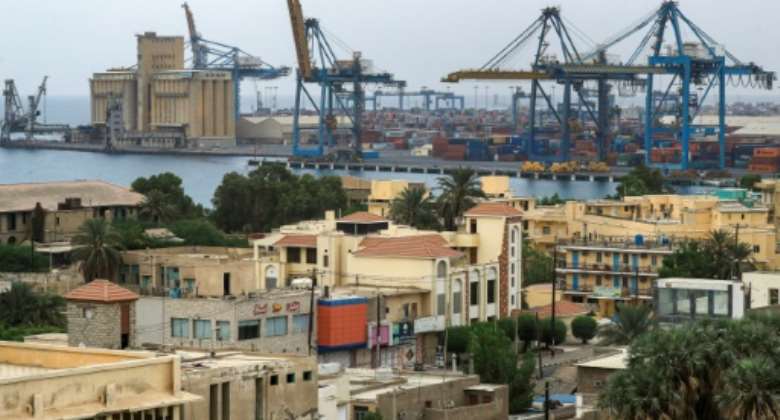 Demonstrators have been blockading the key Port Sudan for more than a month. By Ashraf SHAZLY (AFP/File)

Roads to other provinces and the capital Khartoum have been cut, docks shuttered and even Port Sudan airport was closed for a time.

Four weeks since the crisis erupted in mid-September, basic supplies to the rest of the impoverished northeastern African nation have been delayed, triggering a fresh wave of shortages nationwide.

"I have been stuck here for more than 24 days and my family depends on my income," truck driver Mostafa Abdelqader told AFP.

The demonstrations began when key eastern tribes opposing the transitional government in Khartoum blocked roads and stopped shipments at the Red Sea port.

They are calling for the cancellation of parts of an October 2020 peace deal signed between the government and rebel groups.

The deal, which includes a section on east Sudan, is viewed by protesters as "not representing" them.

Similar protests broke out in the past, but they were brief and on a smaller scale.

Protestors are calling for the cancellation of parts of an October 2020 peace deal signed between the government and rebel groups. By Ibrahim ISHAQ (AFP)

"Some 60 percent of trade passes through Port Sudan with an average of 1,200 containers daily," said Ahmed Mahgoub, head of the southern terminal of Port Sudan.

"We are losing hundreds of thousands of dollars by the day," he told AFP.

The government has said life-saving medicines, IV fluids and crucial commodities such as wheat and fuel are already running low.

Local bakeries in Khartoum and elsewhere across Sudan have been shuttered due to the shortages.

Sudan has been grappling with deep economic woes that worsened following the April 2019 ouster of president Omar al-Bashir after mass protests against his rule, themselves triggered by financial hardship.

"We spend hours looking for bread, but all the bakeries are closed because of short wheat supply," said 17-year-old tea vendor Ashgan, outside a bakery in northern Khartoum.

"This is the last thing we needed. We're already suffering".

'No plan to end crisis'

The knock-on effects have spread nationwide.

"Like Bashir's regime, the government has no plan or even strategic reserves to cover the country's needs," he added.

Members of the Beja ethnic group of east Sudan demonstrate outside the Osman Digna port in the Red Sea city of Suakin. By ASHRAF SHAZLY (AFP/File)

Port Sudan received only 27 ships in September, down from 65 in August, according to the country's cargo association.

Other smaller ports in the east, including Osman Digna in Suakin city, have also been blocked.

Last week, Trade Minister Ali Geddo told AFP that businessmen had been forced to redirect shipments to other ports since early October.

Some 33,000 port workers and others who work in customs and shipping offices have had no income since the closure, the association added.

This has coincided with futile efforts by the transitional government to pull the country out of economic misery caused by decades-long mismanagement and US sanctions under Bashir.

In recent months, it has embarked on IMF-backed economic reforms including scrapping diesel and petrol subsidies, as well as declaring a managed float of the Sudanese pound to stem a rampant black market.

And the country is still reeling from a triple-digit inflation rate which only slightly eased in August and September.

Sudan has also been gripped by a bitter and deepening political divide among key factions steering the transition under an August 2019 power-sharing deal.

On Friday, Prime Minister Abdalla Hamdok described it as the "worst and most dangerous" chapter facing the transition.

Sudan's Prime Minister Abdalla Hamdok has described the political crisis gripping Sudan as the 'worst and most dangerous' chapter facing the transition. By - (AFP)

He cited splits among civilians and the military sharing the running of the sovereign ruling council, as well as factional infighting among themselves.

Several civilian politicians have also blamed the military for the crisis in the east and a failed coup attempt in September.

But that has only hardened the position of the Port Sudan protesters.

"We have submitted our grievances to the government, and are keen to hold further negotiations," protest leader Abdallah Abouchar told AFP.

On Friday, Hamdok said calls by eastern communities are "just", and that their discontent could be traced back to "decades of neglect and marginalisation".

An international conference is planned to address these issues and to fund development projects in the east, he said.

"The government should reach a settlement quickly," said Nayer.

"Otherwise the economic consequences will be catastrophic."