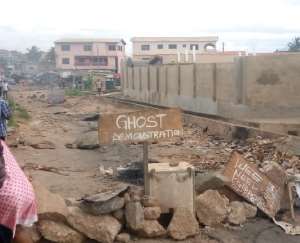 Some residents in and around Hong Kong, Kwashiebu and Santa Maria, on Monday, October 18 blocked portions of that stretch in a protest to get the government fix it.

The dirt road, which serves residents in the three areas, as well as enclaves around them, has been rendered unmotorable by the rains as a result of serious erosion.

It has become stony and rocky, thus, posing a threat to vehicles and their occupants.

The angry residents say they have complained to the authorities on several occasions to fix the road but to no avail, thus, their decision to block it on Monday, as part of their protest.

A team of police patrol officers was seen around the area trying to bring the situation under control.