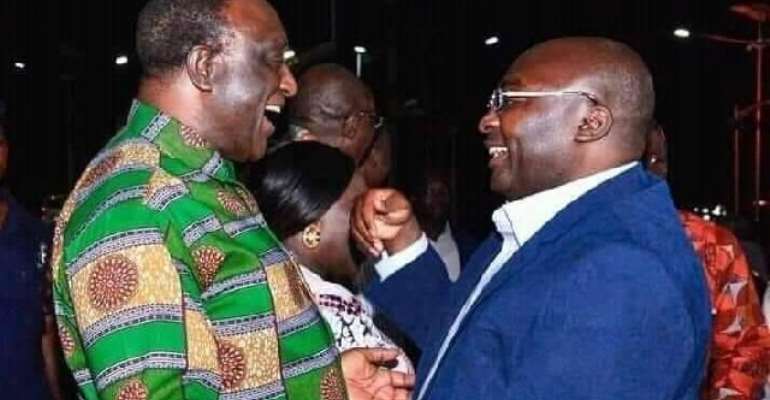 The camp of flag bearer hopeful Alan Kyerematen has said it has unearthed a plot by certain elements within the governing New Patriotic Party (NPP) in the Ashanti Region spearheaded by the Region's Chairman Mr Wontumi to make Vice-president Mahamudu Bawumia the heir apparent to President Nana Akufo-Addo.

The scheme, according to the followers of the Minister of Trade and Industry, was to let all aspirants to positions within the party in the region go unopposed on condition that they declare full support for Dr Bawumia.

The party has, thus, been divided in the region over the alleged plot.

A spokesperson for the Alan Kyerematen camp in the region, Mr Abraham Boadi, also known as ‘Opooman’ in political circles, belled the cat in an interview with Kwame Appiah Kubi, host of ‘Ghana Yensom’ on Accra 100.5 FM on Wednesday, 13 October 2021.

According to him, 10 constituency executives in the region were invited to the seat of government, Jubilee House, at the instance of the Vice-president’s campaign team, to hatch the plot.

Mr Boadi explained that at the said meeting, each of the 10 constituency executives was given GHS5,000 to bankroll the agenda in their various constituencies.

The crux of the Jubilee House meeting, he said, was to make all supporters of the Vice-president go unopposed in the upcoming branch, constituency and regional executive elections next year.

In his view, the scheme was to pave the way for Dr Bawumia to go unopposed in the December 2022 presidential primary of the NPP.

“Not too long ago, ambitious personalities in the party were asked to bide their time, so, why are the likes of the Ashanti Regional Chairman, Mr Bernard Antwi-Boasiako also known as ‘Wontumi’ and his Vice, Mr Kwabena Nseinkyire, hell-bent on making the Vice-president the heir-apparent to the sitting president?” he asked.

He said, “if the Vice-president was a formidable aspirant, he should also join the queue and not bank his hopes on such frivolous schemes to give him an upper hand in the race”.

Mr Boadi, who was the Presiding Member of the Kumasi Metropolitan Assembly (KMA) and an avowed supporter of President Nana Akufo-Addo, warned that they will resist any attempt to let Dr Bawumia go unopposed in the upcoming presidential primary.

“As party loyalists, we are determined to vote for personalities who have shown loyalty and hard work toward the development of the party”, he stressed.

“We will not sit down for a candidate who has no roots in the party to be imposed on us ahead of the party’s presidential primary”, he noted.