Between Idiomatic And Idiotic Expressions 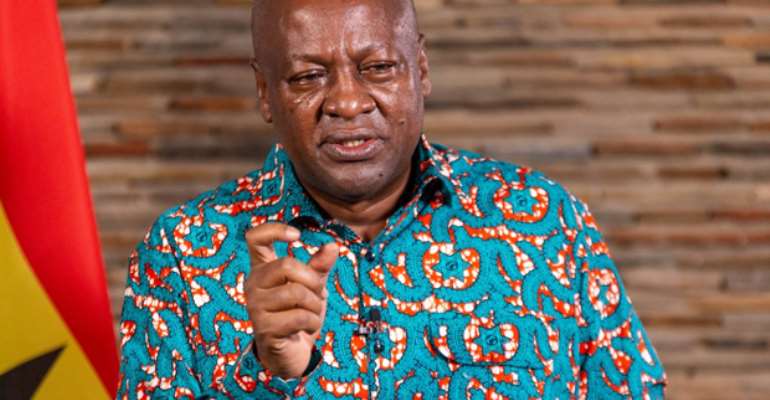 Forgive me if my caption is inappropriate. Don't blame me because I did not get any formal education like former President John Mahama who enjoyed Kwame Nkrumah's free education in the Northern Region.

I am a product of Kwame Nkrumah's Night School and topped it up with Rawlings' Non Formal Education. That is why I find it difficult to understand idiomatic expressions. What I do understand very well is idiotic expression because as unschooled urchins in our holy village, Teacher Musah used to refer to us as idiots whenever we go wayward and play the buffoonery.

Apart from my dictionary, I don't need any Jupiter to tell me the meaning of “do or die”. In my holy village if one says 'if I meet him it will be do or die”, we understand it to mean if he meets the person the end result will be death if matters are not settled in his favour.

Mr. Mahama's effusions recently forced me to look for my old and dusty Webster's Dictionary of Contemporary English to find the meaning of “Do or Die” and this is what it said: Persist unceasingly even if death is the result. I nearly threw the dictionary away after reading the meaning. So Mr. Mahama is telling NDC supporters to persist unceasingly during the 2024 general election even if death is the result? And Mr. Mahama, the Professor Emeritus of English literature is telling us that because some of us did not get good education, we do not understand idiomatic expression. Yoo! We hear. Somebody should tell this desperate politician that indeed, we don't understand idiomatic expression but we do understand idiotic expression like the one he vomited at Techiman. Mahama is forcing some of us to peel respect from statesmanship. See a former Head of State of Ghana stooping so low with absolutely moronic comments!

Mr. John Dramani Mahama is gradually becoming a loose cannon and an unguarded missile. Such persons are dangerous and must be watched. They are like a child holding a sharp implement. If you are not careful in your attempt to collect the implement, you will end up wounding the child or yourself. Having lost his bid to become the president again in 2016 and again in 2020, the man is kicking and threatening hell and brimstone if he loses again. He simply can't bear the pain of defeat. This is a man who told his supporters during one of his 'thank you' tours that he called the supporters to the streets to demonstrate after the 2020 general election in order to cool down their tempers.

How callous and wicked! Where were the thirteen children of Mr. Mahama when the NDC supporters were tricked to go out there to sweat in the scorching sun? He is again calling them to 'do or die'. Who will die for his children to have good time in Dubai and the US?

Sometimes I understand his desperation because in both 2016 and 2020, he was seriously misled by his handlers that he will win the presidential race, hands down. When the opposite became a reality to him, he has been restive and reckless. This is a man who faced the cameras with a brown envelope full of papers, firmly stuck under his sweaty ambit to tell Ghanaians that he won the 2020 presidential elections but when the matter landed at the Supreme Court he failed to open the magic brown envelope to show the judges why he won the elections. And when the ruling was delivered he took the judges to the cleaners, calling their ruling a travesty of justice. He has since refused to congratulate his opponent while he goes around with the 'president-elect' tag firmly fixed on his broad chest. The man doesn't know that he is gradually becoming a laughing stock and a nuisance value.

Mr. Mahama's recent vitriolic invectives are something to worry about as a nation. He seems so embittered that left to him alone democracy is jettisoned for something else which he alone knows hence his infantile 'Clock is ticking' theory. Since losing his presidential petition at the Supreme Court, he has never lost any opportunity to doubt the ability of the apex court to deliver any truthful judgment. He has all too soon forgotten that it was the same Supreme Court that ruled in his favour when then candidate Nana Akufo-Addo petitioned against the results of the 2012 Presidential Election. And this is the same man who looked into the faces of poor Ghanaians and told us that we are forgetful and shortsighted!

I have had cause to write in this column that Mr. Mahama is ungrateful to Ghanaians. This is a man who only worked at the Japanese embassy in Ghana for a few years after graduating from the university and later veered into politics to make his fortune and yet he says democracy is not good for Ghana. He started his political career as an Assemblyman. He later became the Member of Parliament for three consecutive terms and became a Deputy Minister and a substantive Minister when Mr. Rawlings was in power. He became the Vice President of Ghana and also inherited the presidency when Professor Mills died mysteriously.

In 2012, he became the president of Ghana after the Supreme Court ruled for him in a Presidential Petition. He also has many chieftaincy titles bestowed on him and above all, he still draws his salary as the former president of Ghana. So now, what does Mr. Mahama wants again from poor Ghanaians? Life President of Ghana? Habba, Naa Ndewura Jakpa!!!

From all indications Mr. Mahama has hijacked the NDC. His 'Thank You' tour is a subtle way of telling whosoever has the ambition to contest him when the party opens nomination for the flagbearership race to keep off. Democracy has made him fabulously rich so he has the luxury to tour the whole country to thank Ghanaians for voting against him.

Wherever he went he spoke as if he was the best that ever happened to Ghana. He doesn't mince words when it comes to destructively criticizing the current government and he talks as if he left behind a country flowing with milk and honey.

Even when the whole world is praising the Akufo-Addo-led administration for the way the Covid-19 was handled, Mr. Mahama has seen nothing good about it. He is power-drunk and cries wolf when he sees a rat. (Is this too idiomatic expression, Professor Emeritus?)

When things went from bad to worse economically during the tenure of office of Mr. Mahama, he run to the IMF for a bailout and one of the conditions was that Ghana could not employ workers in the public sector. As a result the Unemployed Graduates Association was formed. Today, Mahama is inciting the youth to rise up against the current government because of unemployment. He has forgotten that when he was in power, he could not employ teachers and nurses for close to three years until the Akufo-Addo-led administration came to fix the mess.

Those who have been writing to me to teach them how to start smoking cigar are advised that it is not easy. If you want to start on your cigar journey, consider starting with a mild cigar like Macanido Café, produced in the Dominican Republic to get yourself used to the habit. Progress slowly and you will eventually be like me who always have cigar hanging between my lips like the way Sir Winston Churchill used to do. Excuse me whiles I light up my Arturo Fuente Don Carlos!