An illustrative case of ‘give a dog a bad name and hang it’: What is your problem with agenda 111? 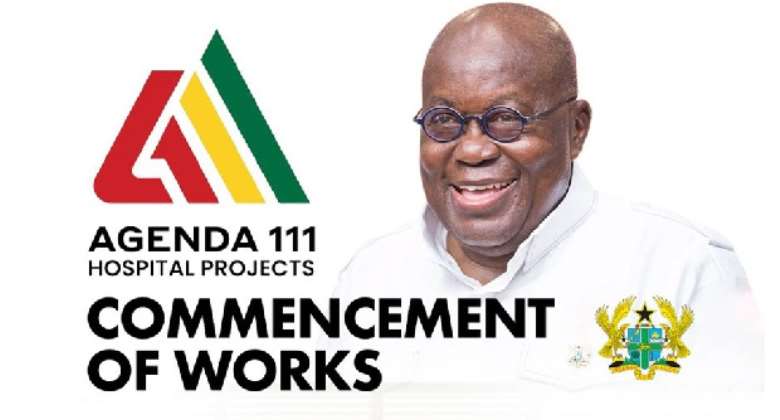 I have always maintained somewhat passionately that there is absolutely nothing wrong for the citizenry to register their grievances through peaceful demonstrations as they see fit.

It is against such backdrop that I, for one, do not harbour any ill feelings towards the social media enthusiasts, who are exercising their democratic rights by shrieking, nagging, scolding, and demanding that the government of the day ‘fix the country’.

That being said, Akufo-Addo and his government are working studiously towards meeting some of the demands of the fix the country campaigners, and have recently commissioned 88 district hospitals as part of the agenda 111-a policy to construct district and regional hospitals across the country.

Bizarrely, however, following the commissioning of the 88 hospitals, the NDC faithful have been organising press conferences with the view to censuring the NPP government led by President Akufo-Addo for allegedly trying to deceive Ghanaians over the agenda 111.

In fact, it is quite nauseating to listen to the same people who have been upbraiding Akufo-Addo for failing to build any district hospital, now turning around to criticise him for trying to do what Napoleon could not do-attempting to build 111 hospitals.

Some brassbound NDC supporters, with unabashed disgust, have been pontificating somewhat fecklessly that the $16.88 million cannot build a World Health Organisation’s standard district hospital and therefore the Akufo-Addo administration is being ‘economical with the truth’ over the agenda 111. How bizarre?

And, there are those who are contending somewhat impetuously that the Akufo-Addo administration cannot get funding for the agenda 111. How pathetic?

Suffice it to stress that if a few corrupt officials can disgustingly squander millions of United States dollars through GYEEDA, SADA, SUBA, NCA, MASLOC, amongst others, why can’t Ghana raise funds to build hospitals to benefit all and sundry?

Ever since the NPP government took office, the seemingly unhappy members of the umbrella fraternity have been venturing to assert somewhat bizarrely that Akufo-Addo and his appointees are performing below the acceptable standards because they promised too much and they can’t deliver.

In fact, I find it extremely difficult to comprehend how and why anyone claiming to be a credible socio-economic analyst can dare stress that the Akufo-Addo government has not been implementing its Manifesto promises.

The fact however remains that since assuming office, the NPP administration has rolled out an encouraging number of its Manifesto promises, including some flagships policies and programmes.

In addition to the reduction of numerous nuisance taxes, the Akufo-Addo administration has implemented Free SHS, One District One Factory, One million per Constituency, One Village One Dam, Planting for Food and Jobs, Planting for Export and Rural Development, Rearing for Food and Jobs, National Builders Corp (NABCO), Restoration of Nurses and Teachers Allowances, amongst others.

With all due respect and no attached condescension whatsoever, the teeming supporters of NDC must stop living in a denial, engage in a serious introspection, and accept the painful fact that the erstwhile NDC administration terrible errors in decision-making rather sent Ghana’s economy deeply into the mire.

I have always insisted that whenever the so-called political communicators keep holding on to vague rhetoric and political gimmicks with a view to misinforming the unsuspecting public, it invariably gives some of us the energy and reason to deflate the obvious misconception.

To be quite honest, it is extremely unreasonable for anyone to expect a government that has been in power for less than five years to honour all its Manifesto promises.

Isn’t it quite ironic that the same people who governed for eight years and wilfully collapsed the once thriving economy could shout from the roof top about the supposedly slow pace of development, less than five years of NPP government assuming power?