Unto Us Is Come The Season Of Vociferous Noisemakers 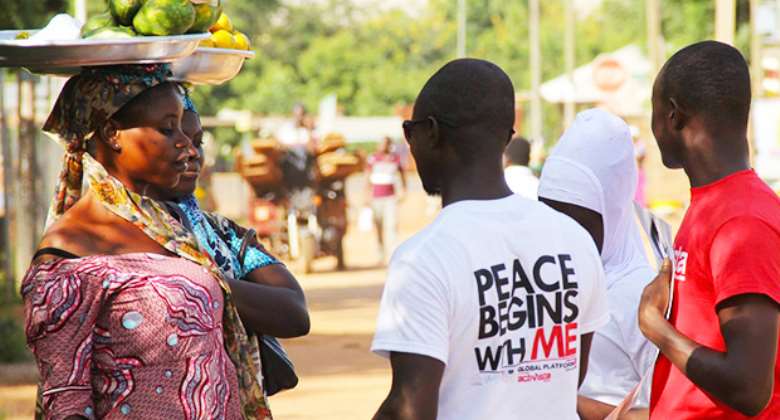 A new way of making money from politicians has come knocking on our doors. If you are good at criticizing the incumbent government destructively and pointing out certain areas which has not been fixed since independence, you stand the chance of being poached by the opposition politicians who would like your acid tongue which speaks bad things only about the government. You will be invited by a political guru in the opposition and contracted to go all out in your criticisms. Moneys and vehicles will then change hands. Your life will change overnight even though you know what you are doing is unfair.

Initially, I wanted to be part of the Fix the Country movement but when I realized that the group had an ill motive, I backed off. I realized that the issue was the brain child of the opposition NDC who are desperately seeking for political power. I thought the issue of Fix the Country was a movement aimed at drawing the attention of the government to areas which should be fixed but sadly, I did not know it was an attempt to put all the blame on the incumbent government which inherited the mess in the first place. For now it looks as if the NPP administration came to put everything asunder. I was nearly tricked to join a group of people who are out there to bleed Ghanaians dry in the name of fixing the country.

You see, some of us are old enough to know where we are coming from as a nation and surely we know where we are going. We don't need any Jupiter to tell us what went wrong and how to fix the country. All governments that have come and gone did their best to fix the country in one way or the other and as we trudge on our eyes are focused on the Eldorado, knowing very well that Rome was not built in a day. For the eight years that Osagyefo Dr. Kwame Nkrumah ruled this country, he tried in his own small way to fix the country. He built roads, the Tema harbor, hospitals, the Akossombo dam, schools and introduced free education in the then Northern and Upper regions of Ghana, established the Ghana Black Star Line among others. The population of Ghana was barely six million when he took over power from the colonial masters. In fact, when he built the Akossombo Dam, he could not extend electricity to the hinterland before his government was overthrown by the Khaki Boys.

For the three years that the soldiers took over power, they rather turned the clock of progress backwards and thereafter handed over a near bankrupt nation to Professor Kofi Abrefa Busia and his Progress Party. The meek and mild professor did his best within the barely two years that he ruled the nation as a Prime Minister. Several feeder roads were built to open up the country during his tenure of office. He built many Health Centers across the length an and breath of Ghana and built Low Cost Houses in almost all the districts to bridge the accommodation deficit. He did not rest on his oars as far as education is concerned. It was Professor Busia who introduced the Experimental Schools which later became the Junior Secondary Schools. In barely eight years, Professor Busia built several school blocks which has been able to stand the test of time.

General Kutu Acheampong and his Supreme Military Council had little to show for the eight years that they held the reins of power. Inflation skyrocketed and the country was barely brought to her kneels. The military top ranks became so corrupt that when Flt Lt. Rawlings and his junior officers mutinied, they had the support of many Ghanaians. Very unfortunately, for the three months that Rawlings and his military junta held the country at ransom, they had nothing to show but blood and iron. They dehumanized Ghanaians in the name of House Cleaning, Accountability and Probity. Heads did roll but at the end of the day, the junta did not account to anybody as they retired to enjoy their booty.

Dr. Hilla Liman, who took over from Rawlings ruled for barely two years like Busia and proved to Ghanaians that we can change the fortune of the nation if we work together and eschew politics of victimization. Within the two years that the diplomat took over power, he also built schools, bought four brand new cargo vessels from South Korea for the Ghana Black Star line to improve international trade, introduced the Trade Liberalization Policy which saw the flooding of the market with essential commodities which was nonexistent due to the introduction of Control Price by the Rawlings Junta and the hoarding of the few that we had on the shelves. Dr. Limann quickly imported several Tata Buses from India to fix the broken down public transportation system which was destroyed by the Rawlings junta. He also imported several farm tractors to promote mechanized farming like the way Dr. Nkrumah did when he was in power. Life started becoming normal until the same Rawlings came storming like General Norman Swarzscoff of the Desert Storm fame. Are you aware Dr. Liman's government was the first to construct an asphalted road in this country? The Accra to Cape Coast stretch of road was asphalted in a matter of one year in office. Ask your grandfather. The German Constructing firm which did the job was called Carl Plotner which later became Construction Pioneers (CP).

Enter Rawlings again and his Provisional National Defense Council (PNDC). For eleven years we had no opposition parties not to talk of a Parliament. The junta ruled Ghana with iron hands and did not brood any nonsense. Once again the blood of innocent Ghanaians flowed and others got missing to be found no more. The man and his team of marauding and indiscipline soldiers introduced the Culture of Silence and topped it up with draconian degrees which nearly suffocated Ghanaians. By the time Ghanaians were able to uncoil themselves from the grip of these revolutionaries, things had gone bad. All the achievements of previous regimes were eroded and we had to start on a clean slate. Rawlings had another eight years as an elected president and still had his military watching Ghanaians from afar. It was a quasi-military regime which did not give room for dissent. They only took the ”P” away and made it NDC. After all, the 64 Battalion or Commandos were still stationed at the Blue Gate, ready to pounce on anyone who dared. I must admit that even though Rawlings was the longest serving Head of State after independence, he also did his best in the area of road construction, school blocks, hospitals and above all, the introduction of the Junior Secondary Schools among others.

Former President Agyekum Kufuor will go down in history as a capitalist president who campaigned on the wings of socialist agenda to power to actually introduce socialist programmes to assuage the suffering of his people from want and social injustice. Immediately he came to power, he realized that pregnant women were dying on daily basis for lack of medical care. He introduced the Maternal Care policy which allowed pregnant women to enjoy free medical treatment. That programme saved many lives which would have been lost. Before coming to power, many Ghanaians died simply because they could not get money to attend hospitals when they felt ill. The Cash and Carry system of health delivery introduced by Rawlings and his PNDC was in operation when Mr. Kufuor took over power. Mr. Kufuor introduced the National Health Insurance scheme which saved lives. To fix education, he introduced the Capitation Grant, teachers' bungalow, free school furniture, school feeding and built many school blocks. The road sector saw a significant improvement and every district had its fair share of road projects. He also built interchanges in Accra and Kumasi. I won't have enough space here to enumerate the achievements of Mr. Kufuor in his attempt to fix the country.

As for Prof Atta Mills, his achievements have been swallowed by Mr. Mahama and his power-drunk cohorts. Everything Mills did has been attributed to Mr. Mahama for the sake of political expediency. The NDC is desperately trying to erode the legacy of Prof. Mills, but it will not wash. Mr. Mahama too played his part in the fixing of the country like the Circle Interchange, school blocks, roads, etc. That is why anytime the NDC propagandists say they have not seen anything that President Akufo-Addo has done, I laugh.

President Akufo-Addo is a big dreamer and he is gradually making his dreams come true. His Free Senior High School dream is a success story and factories are sprouting in many districts. Roads are being built and agriculture, the backbone of the economy, is picking up with the importation of farm tractors and subsidized fertilizers. Cocoa production has hit one million metric tonnes due to prudent measures put in place by Akufo-Addo. School blocks, dormitories and teachers bungalows are being built. The NPP government is reshaping the policies left behind by ex-president Kufuor and which was destroyed by the NDC like the school feeding programme, the Capitation Grant, the National Health Insurance Scheme, the teachers and nurses training allowances and many ambitious programmes. He also built interchanges to ease traffic in Accra. So you see how shallow the Fix the Country noise is? Ain't the government fixing the country by my analyses? And did previous government not try to fix the country in their own small way? Have America, the UK, Russia, China, Japan and other developed countries which started long before we developed teeth finished fixing their respective countries? I rest my case for now but I will not go without puffing a stick of Havana. Any challenger?