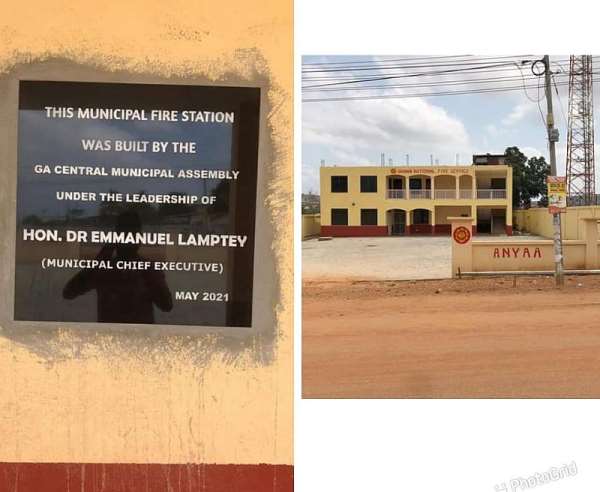 A member of the Communications Team of the opposite National Democratic Congress (NDC), Mr. Ralph Apetorgbor, is demanding an end to what he calls deceitful politics in the country.

According to Mr. Apetorgbor, the situation where successive governments take credit for projects executed by their predecessors without giving them the credit is nauseating and casts the political class in a bad light.

His demand comes on the back of the inauguration of the Ghana National Fire Service(GNFS) office in the constituency by the Ga Central Municipal Chief Executive (MCE), Dr. Emmanuel Lamptey, without crediting the John Mahama led administration that constructed the facility.

The inscription on the plaque read: "This Municipal Fire Station Was Built By The Ga Central Municipal Assembly under the leadership of Hon. Dr Emmanuel Lamptey (Municipal Chief Executive), May 2021" but Mr Apetorgbor said it is deceptive.

The Deputy Communications Officer of the Anyaa Sowutuom branch of the NDC in an interview said the leadership demands the immediate removal of the plaque on the newly inaugurated GNFS station in the area.

They warned that failure to remove the plaque and replace it with the correct information would force party members and supporters to besiege the premises of the Assembly to protest their displeasure about the misleading information.

He explained that the edifice was initiated during the tenure of late Mills-led administration and completed by the past MCE, Mr. Aristo Aryee under the Mahama-led administration and has been under lock and key since 2017 until recently when Dr Lamptey inserted the plaque with his name as the architect of the project.

“The NDC considers it deceptive and tacky for Dr Lamptey who is leaving office in few days due to his incompetence for the past four years to seek to claim credit for projects he never conceptualised, commenced or constructed to near completion, just because he found himself in office at the point of inauguration and we demand immediate removal of the plaque.

“The New Patriotic Party (NPP) government should refrain from taking credit for projects constructed by former NDC appointees since Dr Lamptey acted unpatriotic when he inscribed his name on the plaque for a project completed before he took office,” Mr Apetorgbor added.

According to him, Dr Lamptey had not laid a single block to inscribe his name on the plaque rather the GNFS was inaugurated by him.

According to a Ghanaian Times report, the Assembly Member for Anyaa, Mr. Michael Acquah, have asserted that the GNFS project was commenced and completed before Nana Akufo Addo's government took over the administration of the country from the NDC.

He bemoaned the inscription on the plaque which he described as dishonest, adding that “politics should be about honesty to the citizenry”.