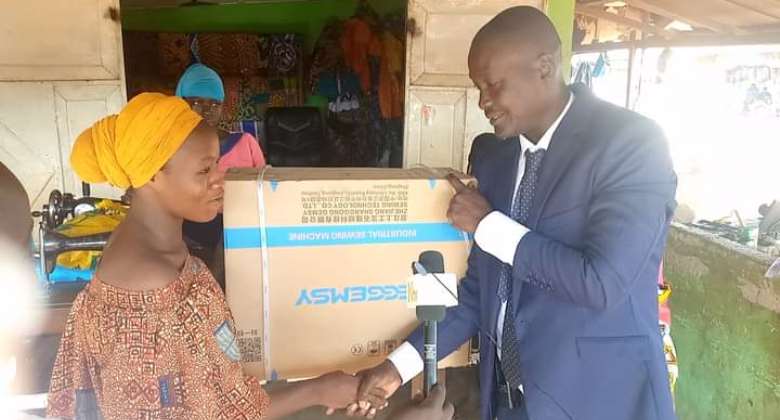 Residents of Gushegu municipal, made up of over a hundred (100) seamstresses, could not hide their joy when the Executive Director of Northern Youth for Peace and Development (NYUPED), Mr. Prince Hardi Adams, paid an unannounced visit to the neighborhood.

During his visit, he gave out brand new SGGEMSY Industrial Sewing Machines worth approximately 15,000 Ghana cedis to lucky tailor shops.

These brand new trailering machines were distributed at random among dressmaking shops with 20 apprentices or more, with six(6) shops benefiting from his generosity.

Mr. Prince Hardi Adams, who presented the items to the various masters of the six shops, told them he was glad the season was not a period where politicians could have used that to campaign for votes, whether internally or in general elections because his gesture could have been misconstrued.

According to him, this is his way of contributing his quota to human development in Gushegu municipal, for it to resemble the ideal city that everyone desires.

“I am donating tailoring machines to a few tailor shops in Gushegu, and I will do the same in Tolong and Tamale. "This is because the majority of my people cannot afford that brand of machine to support their businesses. And I want to relieve them of the burden of traveling to Yendi, which is far from Gushegu, just to receive such services,” Mr. Hardi explained.

“But that's not all. “I have also secured a large plot of land (approximately 10 acres) in the municipal to build a supermarket, recreational center, and swimming pool to serve the people from Yendi to Karaga and other communities around Gushegu,” he added.

The dressmakers expressed their gratitude to the Executive Director of Northern Youth for Peace and Development, saying they were at a loss for words to express their true feelings, adding that this was unexpected of him.

They seized the opportunity to encourage other individuals and non-governmental organizations (NGOs) in the area to emulate Mr. Hardi Adams' gesture, as doing so will bring total development to the municipality and set it apart from its peers.