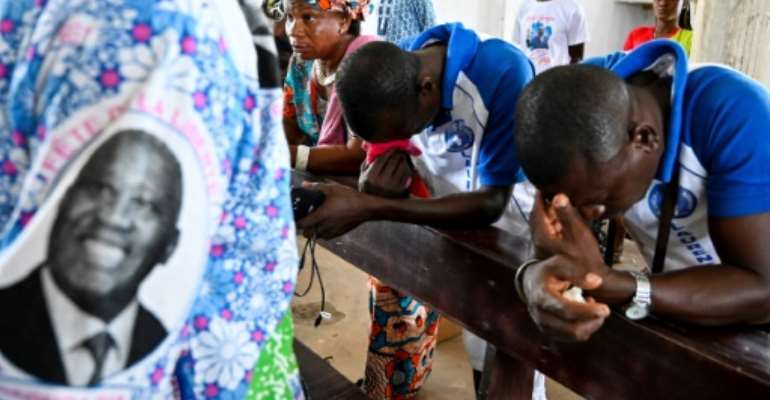 Prayers for reconciliation: Gbagbo's supporters say he does not plan to seek revenge. By SIA KAMBOU (AFP)

Ivory Coast's former president Laurent Gbagbo, who returns home on Thursday after a nearly 10-year absence, has known glory and humiliation in equal measure in his long and chequered career.

The 76-year-old is set to fly back to the country he ruled from 2000 to 2011, after the International Criminal Court (ICC) in The Hague confirmed his acquittal of crimes against humanity.

The charges arose from a five-month conflict sparked by Gbagbo's refusal in late 2010 to accept defeat in a presidential election by opposition leader Alassane Ouattara, whose victory was endorsed by the UN.

More than 3,000 people were killed before Gbagbo was arrested in the economic hub Abidjan on April 11, 2011, and transferred to the ICC.

Gbagbo accused France, the former colonial power, of involvement in a plot that led to his humiliating arrest by Ouattara's forces.

His popularity does not seem to have suffered from his long absence. Thousands of people have been preparing to welcome him in working-class districts of Abidjan.

In his native Gagnoa in central west Ivory Coast, preparations for a hero's welcome are well under way for the leader nicknamed the "Lion of Africa".

Gbagbo is admired for his cheeky personality and gift as a public speaker, in stark contrast with the other two heavyweights of Ivorian politics, former international banker Ouattara, 79, and the dour ex-president Henri Konan Bedie, 86.

Gbagbo comes from a modest, socialist background and presents himself as the defender of the oppressed.

From abroad, Gbagbo maintained a firm grip over Ivorian Popular Front (FPI) party, which participated in the last legislative elections in March after shunning polls for the previous decade.

His entourage point to this as a sign that he does not plan to seek revenge but to contribute to national reconciliation.

A historian by training, Gbagbo began his career as a student trade unionist in the 1970s and 1980s.

He emerged as the main opponent of the founding "father of the nation", Felix Houphouet-Boigny, by creating the FPI as a clandestine movement in a one-party state.

His political activity landed him first in jail, then exile in France.

Gbagbo was finally able to dive fully into Ivorian politics in 1990, when the country introduced the multiparty system for which he had long fought.

Ten years later, on October 26, 2000, he was elected president under what he himself described as "calamitous" conditions.

He beat General Robert Guei, who had staged a military coup in December 1999 and did not recognise his defeat.

Bedie, overthrown by Guei, was barred from the election, as was Ouattara, a former prime minister whose full Ivorian nationality was deliberately cast in doubt. The polls were followed by violence.

In September 2002, Gbagbo saw Ouattara's hand behind a revolt that failed to overthrow him but effectively split the world's leading cocoa producer in half, with rebels in control of the north.

Faced with the rebels and hostility from France, Gbagbo relied on his supporters in the Young Patriots movement, who inflamed the streets. Their fiery leader, Charles Ble Goude, was also prosecuted and acquitted by the ICC for crimes against humanity.

Despite a 2007 peace agreement, the rebels, Ouattara's militia and French forces captured Gbagbo in April 2011.

Imprisoned first in the northern town of Korhogo and then in The Hague, Gbagbo was sustained by his evangelical Christian faith, as was his wife Simone, who was held in Ivory Coast until being amnestied in 2018.

The couple had two daughters. Gbagbo also has a son, FPI lawmaker Michel, from a first marriage to a French woman. Though still married to Simone, he will be accompanied to Abidjan by girlfriend Nady Bamba, a 47-year-old former journalist.