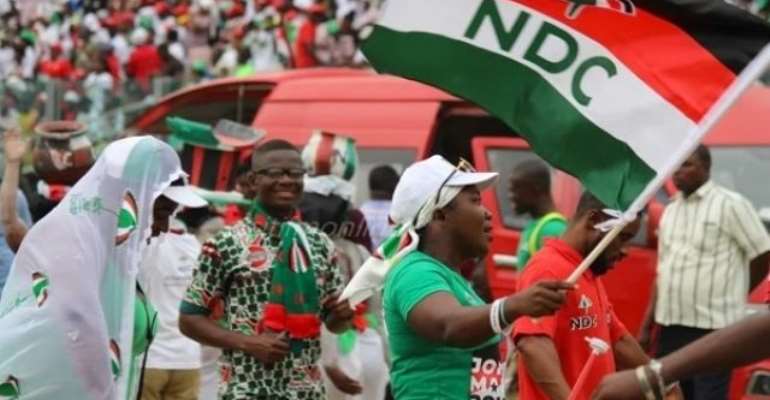 He said the party must also reward and commend the National Vice Chairman, Alhaji Said Sinare for his selfless efforts in making sure the grassroot doesn't give up on the party.

The National Vice Chairman of the NDC, is really making grassroots proud on daily basis on the quiet and it is time some of us, as leading members of this party writes openly to commend him for his endless effort to make NDC the attractive party one will have no reason not to be attracted to and stay with much commitment and loyalty,fraction of his statement added.

LEADERSHIP OF NDC "PROFESSIONAL FORUM" SHOULD AWARD AND MOTIVATE ALHAJI SAID SINARE FOR HIS EFFORTS TO PRODUCE MORE MEMBERS FOR THEM.

It is high time we end the celebration, showcasing people's good works and contribution towards human development only when they die, Alhaji Sinare deserved to be commended, celebrated and praised when he's still alive to set a standard for others to benchmark.

The national vice chairman of the NDC is really making grassroots proud on daily basis on the quiet and it is time some of us, as leading members of this party writes openly to commend him for his endless effort to make NDC the attractive party one will have no reason not to be attracted to and stay with much commitment and loyalty.

This man has taken a personal decision of establishing and advancing intellectual capacity building initiative at his own expense, Alhaji at the end of every academic year don't pay school fees for NDC tertiary students less than 200 across the country, for both undergraduate, postgraduate and even for professional programs.

This man believes, the NDC as a Party need more human capital of high intellectual and professional standard, for it's progress and development, and this is the only contemporary thinking that can make a political party an epitome of election victory always.

Alhaji Said Sinare only daily basis feels uncomfortable to see NDC students, youths and other party people being houseless, so almost every blessed day he pays rent or renews rents for the party faithfuls just to be comfortable and work for the party with zeal and enthusiasm.

It must be noted that, Alhaji Sinare does not have money in excess to say he has no use for his money, it's simply because he's not greedy, and he understands the frustration of the party people, and that alone defines transformational leadership, which he is one.

This man is in opposition but always trying his possible best to put smiles on the faces of the youth and also to put food on their tables, he believes party faithfuls must be happy to work hard for the party without any hindrances.

So I asked myself, is that the same way other former appointees of the NDC put it in efforts to support the party youths in their personal capacities like Alhaji Sinare is doing for which I know?

If one man at the end of every academic year can pay school fees for not less than two hundred party people at the tertiary level, then if all former appointees should at least support just five people, the youths of this party will have no cause to complain of neglect and rejection, and also this party can not count it's professionals in the nearby future, because there will be a lot of intellectual materials to reckon on as a party.

Alhaji Sinare is indeed living to the expectation of the party people, and from my research and information gathered from thousands of his beneficiaries, I will like to sincerely commend this man, what he's doing for comrades, ought to be the reason why people should be appointed in the future NDC government, our next appointees must not think of themselves and their internal families alone, the bigger NDC family members must also be factored in their plans, appointees should always put in maximum effort like Alhaji Sinare is doing to support and keep the party people committed and determined to work with joy for the Party's fortunes.

There are some former party appointees when they call on the grassroots for any form of engagement, no one takes them serious to even think of responding to such calls, but when others call these same grassroots, is just a moment, whatever they want the grassroots get it delivered, do those appointees who do not have command over the grassroots, simply because of greediness and selfishness ask themselves questions why?

If they do ask themselves, then they should consult Alhaji Said Sinare for the solution to their problems with the grassroots.

I recommend to the NDC professional forum to get Alhaji Said Sinare a nice citation and award for his tireless efforts to add up to their numbers in the nearby future, his school fees being paid for students across this nation will definitely produce more professionals for the party to increase your numbers

I have ended here by saying NDC should protect, preserve and celebrate Alhaji Sinare, he is an asset worth the above attributes.