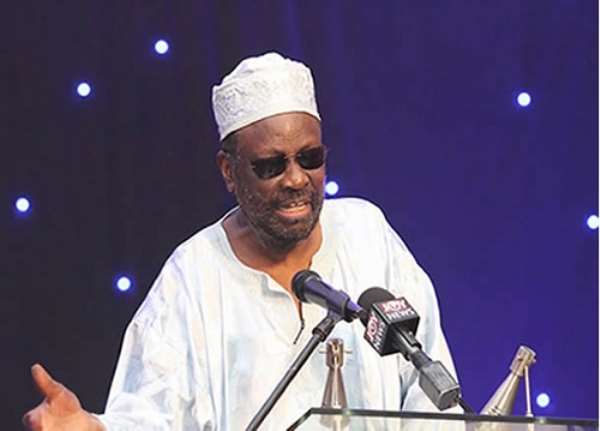 It is distressing to learn from Nsem Pii TV station, that a beautiful waterfall in Ghana has been rendered inaccessible to the local communities by galamseyers.

The criminals have used excavators to dig huge craters that have blocked the entrance. When the locals tried to find an alternative entrance, that too was quickly blocked by excavator action.

An elder of the area who was interviewed by Nsem Pii TV station stated that the galamseyers work at night, so it's impossible to find out from them why they are doing such terrible damage to a cultural site. Rumours state that the galamseyers either have a ”licence” to dig in the area, or else, have “bought land” from locals who own farms near the waterfall.

I have written elsewhere that it is a mark our lack of confidence in our own nationhood that whilst looking around for a solution to the problem caused by galamsey to the survival of our country, we have not adequately explored home-made remedies that are readily at our disposal.

Our ancestors relied on a well-tried system of self-defence to create stable societies that were relatively free of heinous anti-social crimes. Other “offences” that merely affected relationships between individuals, were thought to be of less importance, in that everyone knew the customary laws from birth. So, these “offences” were largely relegated to the related unimportant status of “afisƐm”.

Proper “crimes” related to relationships with the opposite sex, because, of course, they caused friction between men, whereas men were supposed to be united and friendly towards one another, in order to be able to effectively co-operate in defending the nation against an invading force.

Such anti-social crimes included bɔmmɔnaa [forcibly have sexual relations with a sleeping woman who cannot give her consent]; and sɛbe, “di ɔbaa tete ne tɔma mu” [forcibly have sexual relations with an unwilling woman, by violently tearing away the beads around her waist that held in place, the piece of cloth which protected her private parts.”] Punishment for these offences were severe, for, as I have observed, they impeded co-operation between the men who were the nation's defence force.

The defence force itself was known as the Asafo, and undertook evert day social functions that enabled it to be readily and quickly transformed into a war machine, (should a war arise). There is, thus, hardly any village or town in Ghana, in which there isn't an Asafo group.

Each ethnic group in Ghana has its own system (though many overlap, in the sense that although they are similar systems with the same objectives, the systems have different nomenclatures or organisational structures.

In my own Akan society, the ASAFO was also known as the KYIREM group. Kyiremliterally means “Explain it!” which suggests, of course, that apart from its military role, it acted as a brake on the functions of the Chief; i.e. it could summon the chief to a meeting to “explain publicly, why – in a particular issue – he had acted in a manner that had puzzled or offended some of his subjects.

The village or town Asafo is headed by an Asafohene, who sits at the apex of a structure evolved along military lines. The most important elements of the structure are the drummers group and the “Scouts” or intelligence-gathering group (Akwansrafoᴐ).

The main body of the Asafo is, of course, the mass of the community, each with its own family head or Opanin. This is how it deals with an emergency: The drums [twene] and gong-gong [dawuro] are beaten/sounded, and each Opanin, upon hearing the alarm, changes into battle dress and summons his family members to meet him at his house. They exchange information about what's going on, and then they all troop to the Chief's palace or Ahenfie. This process is duplicated in each and every family.

When the Asafo members are satisfied that they have the means of combating the emergency, they set out for the bush.

In one case with which I am familiar, it took them just about an hour to find the body of a woman who had been struck down by the branch of a tree, following a strong rain-storm.

They then brought the body home, amidst war songs.

Because of the role the Asafos have played in destooling unpopular Chiefs in the past, some Chiefs have disbanded them de facto, if not de jure. But right now, in the struggle against galamsey, virile Asafo groups are needed urgently in all the communities whose water-bodies and farms are being mercilessly ruined by galamsey operators.

Some Asafos have already begun to fight the galamseyers, though their work is inhibited by the scandalous way in which the Lands Commission appears to have issued licences to some miners without involving the local communities in the process.

It would be wise of the Government to vote a sum of money to the traditional authorities – through the Ministry of Chieftaincy Affairs and the Houses of Chiefs – to revive the Asafogroups and allow them to defend their territory against galamseyers, in close co-operation with the soldiers of Operation Halt. They could constitute the effective “eyes and ears” of the soldiers.

Certainly, they would not allow excavators and bulldozers targeted by Operation Halt, to be removed from the prohibited sites and parked in their communities. (According to Defence Minister Nitiwul, at least 700 such machines have already been spirited away from the designated sites, to prevent them from being burnt). This has been made possible by the fact that the personnel of Operation Halt are, of course, limited in number and could not have lain in ambush to intercept excavators being driven away from galamsey sites.

THE PEOPLE OF DENKYIRA ARE AMONG COMMUNITIES THATT HAVE BEGUN TO FIGHT BACK THROUGH LOCAL ACTION!

In other words, galamsey criminals would be caught amid great fanfare (!) (as happened during “Operation Vanguard's” forays into galamseyers' territory,) for nothing whatsoever to happen to the criminals, by way of such harsh punishment from the judiciary as would deter them from further destruction of our sources of life – water.

Galamseyers, especially Chinese nationals – are regularly caught on illegal sites, armed with pump-action shotguns, mostly unlicensed. Nothing happens to them, despite the Government having enacted Act 995 of 2019, whose provisions I published in detail in a previous article..

I have no doubt that if the Asafos are drafted to become the main source of information and arrests against galamseyers, they will also follow through and pack the courts, in their numbers, to ensure, with their presence, that the4 law providing for harsh punishment for galamseyers, is enforced o the letter. Thus only can deterrence against galamsey be procured.

Make no mistake – when the Government and the masses work together, through the Asafos, nothing can withstand their combined prowess. We have a precedent for that: the way and manner in which the “Cocoa Rehabilitation” [CR] programme of the 1940-50s became such a huge a success, despite the initial hostility with which the colonial method of “cutting-out” cocoa trees affected by the swollen shoot disease, points to the fact that if and when the Government understands the psychology of the people and carries out an honest practicable programme (not limited to words, – words of hypocrisy that seek to “manage” rather than solve a problem!) the people will give it their support. .

By the way, here is a historical note: it was what he observed of Asante military and social formations, during his command at the head of the British invasion of Asante in 1896, that inspired Major Robert Baden Powell, founder of the World Scouts Movement, to formulate and launch the “Boy Scouts” idea on his return to Britain. He based many of the techniques for military-type activity, disguised as civilian pursuits,that he taught the Scouts, on Asante military strategy.

Baden-Powell was particularly impressed by the Asantes' ability to reconnoitre the positions of their enemies in the jungle, communicate information secretly to the main bases of their army, and launch surprise attacks. He would be surprised if he went to Asante today and found that galamseyers have been allowed to destroy water-bodies and turn cocoa and food farms into a moon-like landscape, dominated by craters filled with stagnant water and algae.

I shall spell out more practical methods for reviving the Asafosand inciting Asafo action against galamsey – without straying into harmful vigilantism – in future articles. I urge readers who have views on this subject to bombard the media with articles and “Letters To The Editor” discussing their ideas. The struggle should not be left to journalists alone, for it is a struggle for national survival, no less.