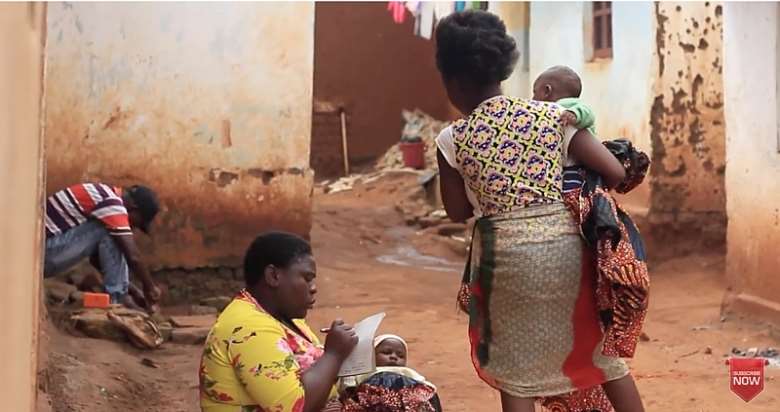 Jessie with her back to camera and her mother with each of them holding her twin babies outside their home in photo courtesy of Harold Kamphinda Jr.

In life, we have all experienced stumbling blocks on our way to success but it takes courage, love, and support from our loved ones to help us overcome. These are a few of the qualities that define our June 2021 COVID-19 heroes who hail from Malawi in the southeastern part of Africa.

Malawi is one of the poorest countries in the world with 50.7 percent of the population there living below the poverty line and some 25 percent living in abject poverty. Over 9% of the adult population is also living with HIV/AIDS. In Malawi, 42% of girls drop out of school before the age of 18 and 1 out of 10 gets married by age 15.

Jessie, a grade 5 student who dropped out of school because of being pregnant, later gave birth to twins at age 15. Jessie is one example of many girls in Malawi that are dropping out of school due to early pregnancy. The plight of Jessie was brought to TheAfricanDream.net by Harold J. Kamphinda Jr. who is a Malawian book author, radio personality and now our Hero of COVID19 for June 2021.

Harold has been working on several humanitarian and awareness creation stories in Malawi that shed light on difficulties faced by everyday Malawians, bringing global attention to them and helping find solutions for them, he also captures the beauty and uniqueness of Malawi in his work. His work however puts him outside of his comfort zone sometimes in order for him to give a voice to the voiceless through his dedication and self-sacrifice, despite his limited resources he gets his stories told, and that is what made TheAfricanDream.net vote to shine a spotlight on him.

But Harold in his modesty preferred to shift the focus from himself to this particular subject of his — Jessie. And so here is her story as told through the lenses of Harold: “She was engaged in a relationship with a 16-year-old boy who was in grade 8 that led to her becoming pregnant, she, however, kept the pregnancy secret from her parents due to her fears.” But later her mother discovered it as Harold tells us, explaining that Jessie’s pregnancy was noticed by her mother who realized her daughter had missed her period.

Mom advised the daughter to go to the hospital where it was confirmed that Jessie was 6 months pregnant. It was after this confirmation that the child-mom opened up to her mother who initially became furious upon hearing and blamed her for not opening up to her about the pregnancy. With the cat out of the bag now, it was arranged with Jessie’s uncles to go to see the family of the young boy responsible for the pregnancy. According to Harold, “Unfortunately the boy’s parents denied that their son was responsible, their excuse being that he is still too young to impregnate a young girl.”

This rejection was probably because of the high poverty rate of the country which meant accepting responsibility meant having two more mouths to take care of that the boy’s family weren’t too keen on doing — considering the fact that both potential parents were themselves children. At this point, the family felt very embarrassed. A frustrated father of Jessie was already weighing the option of sending his daughter to the village.

His wife however disagreed with this move, arguing with her husband that conditions at the village are even worse and that it was better she stayed and received whatever little support they as parents could provide the young single mother.

It is quite interesting that Harold with little support took it upon himself in the company of a few friends to travel to the town in Malawi to not only cover the story of this young mother but to also spend days creating a video of it to bring first-hand visuals to the daily experiences of this situation that mind you is a common occurrence in his country. The video which is now available on his YouTube and which was produced amidst the pandemic speaks to the relenting selflessness of Mr. Kamphinda Jr. to tell a story in a way that gave some much-needed awareness to Malawians and others around the globe.

Thanks to Harold’s resolve, we are aware that Jessie has given birth to twins which she named Precious and Patience. Her challenge now for her growing babies is staying healthy enough for her body to produce and provide the nourishment the twins need as she herself due to the harsh economic realities ends up sometimes eating only once a day, which affects the production of her breast milk.

“She is sometimes forced to abandon her kids to go look for menial jobs like washing for other people to make money. But Jessie is a brave young girl in an unfortunate situation. Yet she has learned a great lesson and desires to go back to school so that she can create a better future for herself and her twins. It is that determination and visionary thinking about her that amazes me,” said Harold to TheAfricanDream.net about why he kept following this story. “If she is willing to defy the odds then I have no excuse to not sacrifice my comforts to bring her story to Malawi and the world,” he insisted.

Baby in the breech, yet the battle for survival rages on

There is more to this story. So after 9 months passed without delivery Jessie was taken to the hospital for a check-up and it was discovered that her twins were in a breech position and the only way she was going to deliver was through a Caesarean section, which also came with its added huge financial burden.

Bear in mind though, this was all happening at the time where Malawi has been hit hard with COVID19 which pushed Jessie’s father out of business as a welder, forcing the family to heavily rely on his wife who went to the market daily to sell vegetables to make ends meet for the family. Proceeds from her vegetables’ sales are what supported the entire family which although was not enough, miraculously saw Jessie through her pregnancy, with none of them catching COVID.

Baby and mother with their families are safe, the impoverished circumstances under which they live still persists though and TheAfricanDream.net June 2021 COVID19 Hero is going the extra mile to help raise awareness for them and others in difficulties to not only help ease their financial burdens but also to educate society. The factors that lead to situations like what happened to Jessie and how to avoid them or reduce their occurrences continue to be brought to light by Harold.

Watch Harold’s video below and kindly reach out to let us know if you are interested in helping in any way or have similar stories that you feel we can share with our audiences and the world.