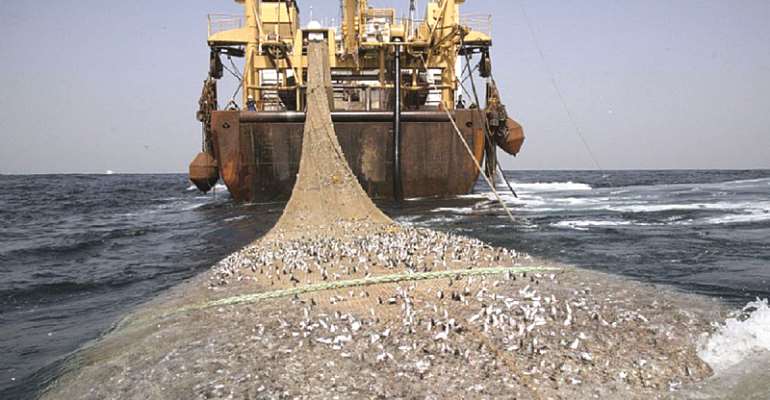 The Ghanaian government’s failure to tackle illegal fishing has resulted in a second yellow card – a formal warning that could lead to a seafood export ban to the EU. The recently appointed Fisheries Minister must break with the past to enforce Ghana’s own laws and eradicate illegal fishing, while ensuring transparency across the industry that will expose illegal operators and reward those who abide by the law.

Ghana’s waters have been plagued by illegal fishing for decades. In particular, saiko is a severely destructive form of illegal fishing, where industrial trawlers illegally target the staple catch of small-scale canoe fishers and transfer it to specially adapted boats at sea for sale at local markets. The practice is having a severe impact on Ghana’s ‘small pelagic’ fish populations, and sardinella is already on the brink of collapse, with landings having crashed by 80% over the past twenty years.

Ghana was first issued with a yellow card by the EU in 2013, and this was lifted in 2015 as a result of new legislation and a clear fisheries management plan. However, while these policies are well constructed, they have not been implemented or enforced, allowing the situation to deteriorate and leading the European Commission to re-issue a yellow card warning. Ghana is the second country ever to have been re-carded in this way and must now urgently work to eradicate illegal fishing by vessels flying its flag and operating in its waters.

The key to safeguarding Ghana’s fisheries and the livelihoods of 2.7 million Ghanaians that rely on them, is drastically improving transparency of the fleet, says EJF, which has worked to alert the government of illegal fishing since 2017.

Currently, the Ghanaian fishing industry suffers from a shocking lack of transparency. This allows illegal operators to disguise the identity, ownership and history of fishing vessels, avoiding detection and sanctions. As a result, illegal fishing is rife and vast over-capacity in the fishing fleet continues to decimate fish stocks.

Around 90% of Ghana’s industrial fishing trawlers are owned by Chinese corporations despite foreign ownership or control being illegal, investigations by EJF have shown. The lack of transparency allows these operators to set up opaque corporate structures and work through Ghanaian ‘front’ companies to obtain licences to fish.

This means that Ghana is losing out on up to 23.7 million US dollars every year in revenue.

Fines for illegal fishing ­– which has been linked to Chinese companies – are often below even the minimum stipulated by Ghanaian legislation and do not meet Ghana’s responsibilities under international law. Ghana’s licensing fees are also far lower than other states in the region, under the misplaced justification that they are intended for local, not foreign, vessels.

CEO and founder of the Environmental Justice Foundation Steve Trent says: “Now is the time to eradicate illegal fishing in Ghana once and for all. Saiko is precipitating a human and ecological crisis, with fish stocks on the brink of collapse and livelihoods and food security on the line. Ghana has the means to end saiko, and it is important that it takes steps to do so immediately.

Transparency is a low-cost, highly effective means to tackle illegal fishing, improve accountability and support meaningful participation in decision-making. Simple measures that Ghana can take today include publishing fishing licence lists and punishments for illegal fishing – where the true ‘beneficial’ owners are clear in both cases. The Honourable Minister Hawa Koomson now has an opportunity to work with the EU to introduce robust transparency measures and fully implement Ghana’s laws. His Excellency President Nana Akufo-Addo should look to secure a legacy that will safeguard Ghanaian jobs and food security.”