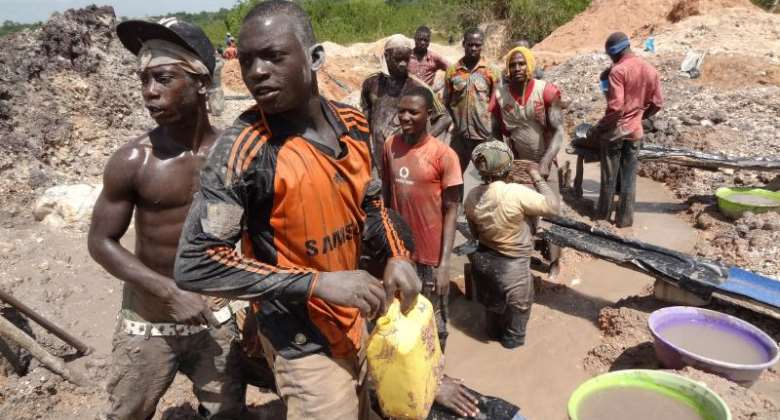 In an unprecedented move by a group of Ghanaians in the Diaspora (USA/Europe/Asia), who are appalled by the neglect and failure of the Government of Ghana under the leadership of Nana Akufo-Addo to combat illegal mining across the eastern/Ashanti regions of Ghana, have collected signatures from over 5000 Ghanaians to petition the United Nations Environmental Protection Agency and the United Nations Environment Programme to come to the rescue of Ghana since it seems the government of Ghana doesn't have the political will nor resources to prevent the destruction of its Rain Forest and water bodies.

It is recalled that in 2016 when the current government took over power, the President declared to the nation that he is putting his presidency on the line to bring an end to the ongoing menace and destruction of our lands and water bodies. A young man who was killed trying to prevent illegal mining (Galamsey), was at the time a wake-up call for Ghanaians to critically take a look at what was going on.

The petition addressed the lack of urgency by the current government, the corruptive ways in which government officials have been compromised by the Chinese and party interests over national interests, and the falsehoods propagated on the Ghanaian media space which does not tell the people of Ghana the real truths of the destruction taking place, with government soldiers sent to protect the very people who are raping the lands and destroying livelihoods of the people of Ghana in that region.

The most damning observation made by the group was the ripple effect of illegal chemicals being used for the mining, and the illegal chemicals used to destroy trees/vegetation around the mining sites, all of which pollute the Water bodies and farming lands in the area.

The visible signs of this can be seen in the decolourisation of the Rivers Pra and Ankobra both of which look like the flowing river of chocolate drink. One can only imagine what happened to the marine life that once existed in these rivers and the people that once depended on these rivers for sources of drinking water.

Without going into the politics of reasoning, the group also lay the blame solely as the feet of Government and the International Community that have stood by and watched the destruction, since the Gold from these regions never end up on local Ghanaian markets, but rather find its way to Europe, America, China, and the Middle East ., with the Euro and Dollar benefiting immensely from this.

On April 21st, 2021, the world celebrated yet another WORLD EARTH DAY, with the hypocrisy of western governments once again on display, while these same governments enable leaders like that of Ghana's Nana Akufo-Addo, to continue to turn a blind eye to the destruction of its land and waterways, forgetting that the West African Rain Forest is equally as crucial to the ecosystems that keep us all alive today.

Finally the Diasporan Development Network (DDN), under the leadership of its founder Eng., Stephen Owusu Mensah has called on all concerned Ghanaians both home and abroad to come together with an implementable framework that curbs down the illegal mining, treat the water bodies, and protect the livelihoods of the people of these regions.

The group is also calling on the UNEP for a partnership that ensures that our environmental protection network is resourced enough to ensure less damage to the global climate as a whole. We are all in this together, and it's time to hold the Government accountable.

Let's not be spectators but accountable citizens able to speak truth to power, so we can collectively build a future we can all be proud of. Ghana First is the agenda, and Ghana needs help from all and sundry.