Just Command and it shall be done, Oh Mr President 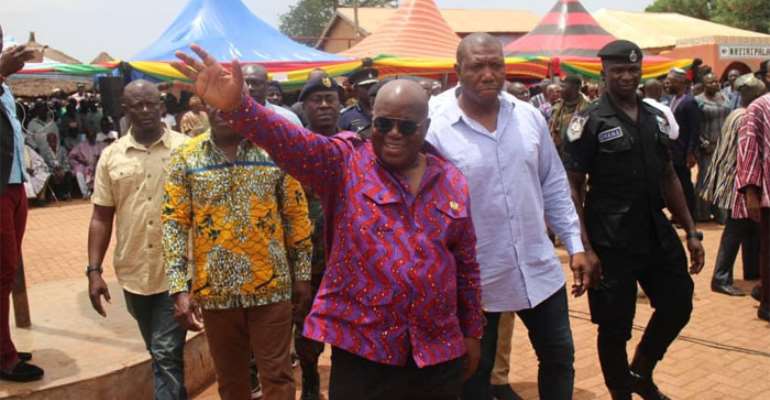 There can never be any tangible excuse to offer by His Excellency the President, Nana Addo Dankwa Akufo-Addo, for not being able to curb the ongoing insecurity of murders, arsons, kidnappings and destructive surface and alluvial mining (galamsey) in the country. He has the ABSOLUTE POWER and MANDATE to let cease any of the mentioned nationwide crimes of concern as just mentioned above.

He is vested with the constitutional authority to ensure the safety and protection of the Ghanaian human lives from extinction by any of the crimes stated above. He is mandated to protect the sources of human sustainability in the country as are lands, water and air and also, to protect the natural resources of the country for the collective use and benefit of the people.

He can never exonerate himself from blame should he fail to execute his mandate to the letter and spirit as may be stipulated in the constitution to ensure the prevalence of security in the country and the non-destruction of the nation's natural resources by both native Ghanaians and foreign rogues.

As it was the case of Prophet Jeremiah in the bible, so should it apply to the President by virtue of the constitutional powers vested in him. From Jeremiah 1: 8-10, the bible says, "8 Do not be afraid of them, for I am with you to deliver you,” declares the LORD. 9 Then the LORD reached out His hand, touched my mouth, and said to me: “Behold, I have put My words in your mouth. 10 See, I have appointed you today over nations and kingdoms to uproot and tear down, to destroy and overthrow, to build and plant.”

Has the 1992 Constitution not bestowed some powers on the president to manage the country responsibly for the collective benefit of Ghanaians? If he sees anything that is dangerously going against the safety and protection of the citizenry in whatever shape or form, doesn’t he have the authority to stop it by simply issuing ORDERS and it shall be done?

As God put His words in the mouth of Jeremiah, thereby empowering him to boldly go out to declare whatever He had charged him to do and it shall be done, so does the constitution empower the president to issue certain orders and they shall be done. Therefore, failure to stop the ongoing ritual or otherwise murders, kidnappings, arsons and intentional destruction of the water bodies and lands in the country, must be blamed squarely on the head of the president but nobody else.

Without applying the whip of “Hire and Fire” and the authority as is vested in the president to ensure that the nation develops to the benefit of all by the obedience of the laws, the president is bound to fail. If he fails, he is the only one to be blamed and held accountable by the present generation and the posterity.

Good governance is not easy. It is delicate and complicated. However, it is not a matter to be approached wearing a kid’s glove. It needs mastering. This is why the laws, adaptability, pragmatism, meritocracy and honesty must be combined and strictly applied as and when the situation merits or demands.

Currently, many a Ghanaian is not seeing the anticipated level of security and protection let alone, the robust fight against official corruption as hoped for in the president hence not a day passing by without heinous crime of some sort being committed in Ghana.

To be honest with the president, as concluded from what many Ghanaians are saying in public and in private, he is letting the people and the country down despite the international accolades and applauses he is receiving. His inability to deal decisively with the unfolding daily crimes, especially the ravaging galamsey activities by the Chinese nationals and greedy native Ghanaians that are turning the country’s water bodies into rivers of flowing mud and the fertile and arable lands into wastelands, goes to negate any successes in other areas of the economy chalked by him.

Mr President, just command and it shall be done. The power is in your mouth same as God put his powerful word in the mouth of Jeremiah.

For my love for you, I will continue to suggest the right things to you. For if you fail the nation, I have also failed and disappointed Ghanaians because I wrote a lot in your favour and my publications might have certainly convinced some Ghanaians to vote for you. It is not too late to do the right thing to correct the wrong perception or the factual negative impression being created in the minds of Ghanaians.

I will not tell you the sweet lies that you may want to hear but the bitter truth that you need to hear.

Mind you Mr President, it is said, “It does not belong to he who is leading to redirect his steps”. Things are not going well at all. It does not take much effort and money to issue words of command from your mouth to your Sector Ministers to deal with the various crimes. Any of them that fails to do as you command, simply FIRE them, period!

Without your readiness to wield the weapon of “HIRE & FIRE” but to rely on the corrupt judicial system to address the crimes reported to them amid their delaying of adjudication of cases through unnecessary adjournments, Ghana will be overwhelmed by crimes to obliterate any gains you may have made so far.

He who comes by this publication should please forward it until it reaches His Excellency the President, Nana Addo Dankwa Akufo-Addo.

To conclude, I quote Galatians 4:16 – “Am I therefore become your enemy, because I tell you the truth?”