If You Profited from Mills' Death, We Won’t Allow You To Do Same With Rawlings To Win Sympathy Votes — NDP To Mahama 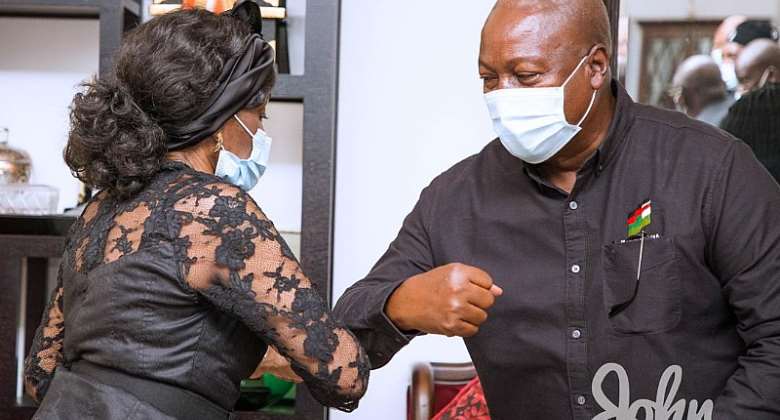 The National Democratic Party (NDP) has launched a scathing attack on former President John Dramani Mahama over the death of Jerry John Rawlings.

The NDP has warned Mr Mahama and the National Democratic Congress (NDC) over alleged attempts to take advantage of the death of ex-President Rawlings to win sympathy votes in the upcoming December 7 general elections.

Speaking at a news conference in Accra, the General Secretary of NDP Alhaji Frimpong stated that “If John Mahama managed to profit from the death of President Mills, he should not be allowed to do same with the demise of our beloved President Rawlings and Ghanaians should not and will not oblige him that.”

He continued, “We want to serve notice, that the NDP will make it a point to expose those who are making feverish attempts to rewrite their despicable opinions about President Rawlings and readjust their abhorrence for the man after all the sacrifices he made for them. And now, upon his demise, they are seeking the limelight for more personal political gain! How dare they!.”

Mr Frimpong is asking the leaders and members of the National Democratic Congress (NDC) to better stop what it termed as crocodile tears over the demise of former President Jerry John Rawlings.

He noted that when the late former President Rawlings was alive, former President John Mahama and the NDC disrespected him and desperately wanted to silence him. "And now that he is no more, they want to utilize his death to galvanize support for their failing political campaign ahead of the 2020 general elections.

He added, “We are troubled that some of these same persons, upon the demise of President Rawlings, now seek to lead in mourning the man; they have begun to shed crocodile tears. They spent thousands of dollars to sponsor videos made in Washington DC by one Kelvin Taylor, who is tipped to be information Minister in the event of a Mahama comeback, to insult President Rawlings in words, some of which we dare not repeat, and posted them all over the world through Facebook, WhatsApp, and other social media platforms.

Mr Frimpong further accused Mahama and the NDC of endorsing the misdeeds of Kevin Taylor against the Rawlings.

He argued that “With the apparent endorsement of John Mahama and the NDC leadership, Kelvin Taylor said, and I quote, “Rawlings is a modern-day Judas and a hypocrite. He and his sleazy wife are greedy. He behaves as a lapdog to the NPP government and always kisses the ass of Nana Akufo-Addo anytime he gets the opportunity to speak about corruption.

"He also went on to say and I quote, “JJ Rawlings is not God, he is bad national and a modern-day Judas… and such a man does not even deserve to be a Statesman.” “JJ Rawlings is a coward… [you are] a hypocrite and a disgrace on the lap of a midget.”

Ayikoi Otoo pulls out of NPP chairmanship race
1 hour ago