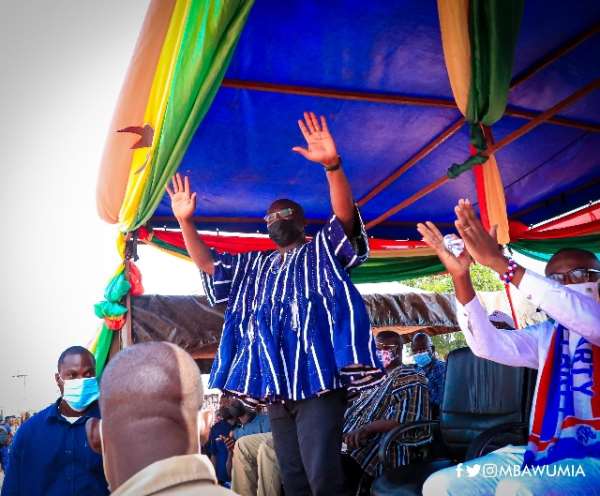 He said there will not be any case of guinea fowls flying to neighbouring Burkina Faso under his leadership as happened under Mr John Mahama while in office as president.

Dr Bawumia, who is touring the region, said the intention of President Akufo-Addo and the NPP is to develop every part of the country, including Sirigu, and, thus, urged the people of the area to support the NPP to retain power in the 7 December 2020 polls.

A few weeks ago, Dr Bawumia raised the guinea fowl issue when he challenged the former president to render account to Ghanaians about one single equal opportunity he created for the citizenry while he was president of the country before he can be taken seriously for his promise to create equal opportunities should he win the forthcoming polls.

Speaking at Kpong during his tour of the Eastern Region, Dr Bawumia questioned the sincerity and credibility of Mr Mahama's promise, saying the NDC presidential candidate has no track record of creating equal opportunities, both as vice-president and president.

"For 8 years, when he was in government as president and vice-president, where were the equal opportunities he built for Ghanaians?" Dr Bawumia asked.

On the contrary, the NPP, the vice-president said, has proven to be the party for the masses, which creates equal opportunities for all, and he cited examples by the Akufo-Addo government.

"And we are going to give loans for access to tertiary education for all. We also want Zongo communities to have model Senior High Schools."

The Vice-President challenged the NDC to tell Ghanaians what equal opportunities they created in 8 years.

He also urged the constituents of Lower Manya to rally behind President Akufo-Addo to continue with his all-inclusive developments and interventions, as well as the NPP parliamentary candidate, Samuel Nuertey Ayettey aka 'Teddy' to complement the work of President Akufo-Addo.