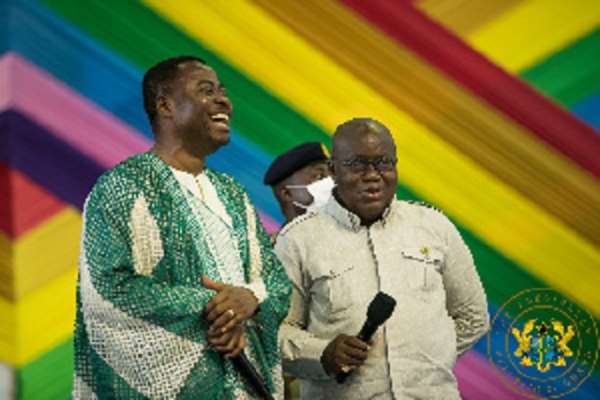 Scores of party supporters yesterday defied the rains to cheer President Nana Akufo-Addo when he began his tour of the Greater Accra Region yesterday.

Everywhere he went, people lined up along major roads and streets in the capital to welcome him amid chants of 'four more for Nana’.

Even before he arrived at the place, the church had been swamped by party faithful chanting 'four more for Nana'.

Addressing the congregation of the RPNGC at Kasoa, President Akufo-Addo said, “All that I promised to do, in your own presence and in the presence of God, you can all attest to it that I have done a lot of them.”

So far, the President said he had visited all regions of the country and that when he decided to start that of Greater Accra, he deemed it important to inform the church.

That, he said was because “four years ago, I came here to implore Rev. Anthony Kwadwo Boakye to pray to God Almighty on my behalf for victory in the 2016 elections. He prayed for me, and God listened to his prayers and I emerged victorious. Afterwards, I came here to show my appreciation to him and the church for the good thing they did for me.”

The remaining seven model schools are located at Kwadaso, Dabaa, Awaso, Abomosu, Akrodie, Weija and Kpasenkpe. Seven out of the nine schools are proposed science-focused schools, with the other two being the first-ever Creative Arts School at Kwadaso in Kumasi and a senior high technical school at Dabaa, named after former President J. A. Kufour.

The Weija Model Senior High School is fitted with the full complement of amenities such as playing fields, administrative buildings, libraries, and dormitories.

Additionally, the V-Block in the school has a total of 24 classrooms, as opposed to 12 classrooms in the E-Blocks constructed by the former administration.

Rev. Anthony Boakye prayed for God's blessings for the NPP.

In the Weija-Gbawe Constituency, he inspected works on the ongoing construction of one of eight model science senior high schools.

From there, he proceeded to Kpone in the Kpone-Katamanso Constituency, where he cut sod for the construction of the Kpone Municipal Hospital.

The President then moved to cut sod along the Tema-Aflao for construction works to begin on a 17-kilometre Tema-Aflao highway into a six-lane road being undertaken by BHM Construction International, which is expected to be completed in 18 months.