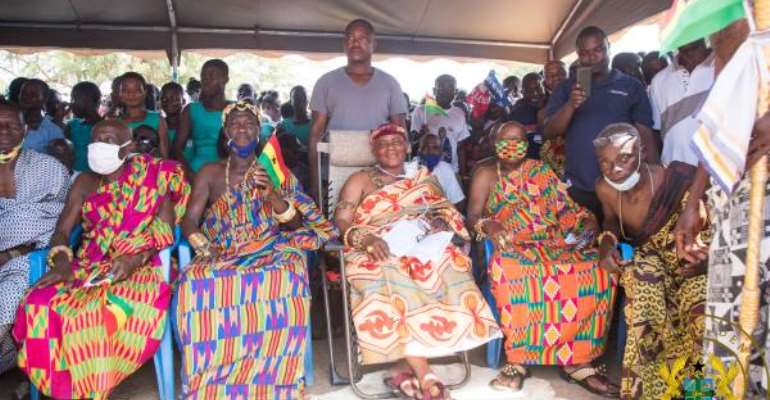 The Gyaasehene of Jasikan, Nana Osei Boakye IV, has said the number of roads being constructed in Buem in the Oti Region by the Nana Akufo-Addo led administration is unprecedented.

According to him, the community had not seen the construction of four major roads within a year before the Akufo-Addo government came to power.

“When our President declared 2020 'The Year of Roads', we had the assurance that he would deliver and that Buem will not be left out. We are witnessing the ongoing road projects: Hohoe-Jasikan road; Jasikan-Worawora road; Jasikan-Bodada road; Jasikan-Kadjebi-Pepesu road; and Jasikan town roads. It is unprecedented that Buem has all these going on in one single year. This, is true, credit to our hardworking President, Nana Addo Dankwa Akufo-Addo. Thank you so much, Nana, we appreciate you.”

Addressing a durbar of Chief at Jasikan, Nana Osei Boakye IV, also thanked President Akufo-Addo for seeing to the creation of the Oti Region, describing him as “the courageous Ghanaian Head of State to make that dream a reality. Nana, we shall forever remain grateful.”

Thanking the President for the “exemplary leadership you have shown in this country's development in less than four years”, the Jasikan Chief indicated “you have carved a special name for yourself and your country in world history. No doubt you continue to draw applause from within and outside Ghana. We congratulate you on this achievement, Nana.”

According to him, policies such as Free SHS, Planting for Food and Jobs, Planting for Export and Rural Development, 1-District-1-Factory, 1-Village-1-Dam, 1-Constituency-1-Ambulance, restoration of allowances paid to teacher and nursing trainees, are all yielding great results that are visible for all to see.

“Indeed, God has blessed you with a head full of wisdom and a heart of courage to deliver on his direction to save this country from going down the line of destruction,” he added.

Expressing the appreciation of the people of Buem, Nana Osei Boakye IV, noted that the Oti Regional Education Office is being established at Jasikan, a development, in his view, will make Jasikan the educational hub of the Region.

“Bueman Senior High School has benefitted from an 800-capacity girls' dormitory and a 6-unit classroom block that will increase student intake and end the double-track system. The last time Nana President was here, the Headmaster appealed for a school bus and a pick-up vehicle. The bus has been duly delivered,” he added.

President Akufo-Addo, in the course of the day, inspected work on the Nkonya Wrumpong – Kwamikrom Road, which has been awarded to Messrs First Sky Construction Gh. Ltd., at a contract sum of GH¢ 58.8 million.

The total length of the project is 21.0 km, with rehabilitation work involving site clearance and demolition, provision of roadside drains to effect proper drainage of the road to ensure pavement longevity, sectional ground improvement, provision of double seal surfacing and provision of road line markings and road signs to enhance road uses' safety.

Currently, the progress of works stands at 43% completion.

Previous attempts to reconstruct the road failed, and, as a result, the entire 56.4km Jasikan-Dodo Pepesu Road was packaged as an EPC contract under the MASTER PROJECT SUPPORT AGREEMENT (MPSA) to support priority projects in Ghana and awarded to Messrs Sinohydro Corporation Limited in August 2018 at a cost of US$45,335,208.43.