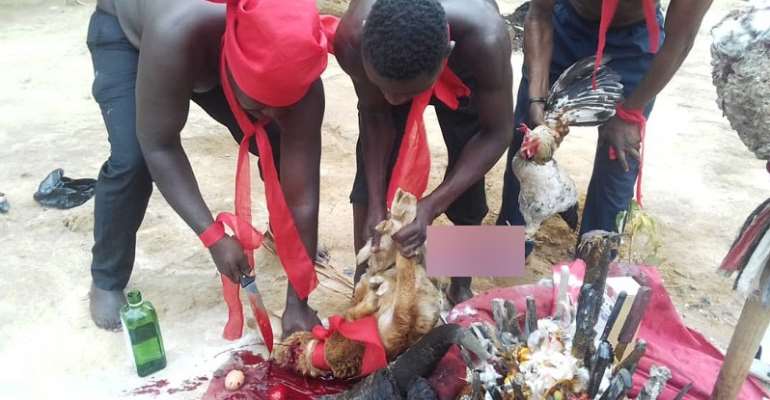 Some members of the opposition National Democratic Congress (NDC) in Agona Kwaman in the Agona West Constituency have beseeched powerful gods of the town to deal ruthlessly with anyone destroying the image of the NDC Parliamentary Candidate for the area, Paul Ofori-Amoah that he contracted some people to kill the NPP MP for the area, Mrs Cynthia Morrison.

They’ve entreated the dreaded deities to cause persons behind the allegation to bloat and writhe in pain if it turns out that the story is a mere fabrication by opponents of Mr Ofori-Amoah.

The group was led by an NDC Coordinator in the town, Kweku Odoom to the shrine while Okyeame Anane, on behalf of the deity poured a libation to pave way for the ritual.

“Whoever is making false accusations about our PC, we ask that within a week, let that person be struck with a strange disease. Let the false accuser bloat, whether man or woman don’t spare the person. Whoever is also spreading the false allegation must also have his or her share of the disease. Let that person go naked when he or she is in the midst of people until the person confesses wrongdoing. whoever is responsible for this allegation should never eat or board a vehicle. When the person moves, go with that person, when he/she eats, eat with the person. When the person sleeps, sleep with him or her. If it the case that, our candidate is indeed responsible for the plot, then equally punish him.”

Mrs. Morrison who’s also the Minister for Gender, Children, and Social Protection last Monday lodged an official complaint with the Central Regional Police that Mr Ofori-Amoah had contracted some four men to kill her.

Akufo-Addo Has Turned Ghana Into 'Hell-Hole Instead Of Parad...
2 hours ago